Can We Get Some Meat Up in Here?

Back from a day in the Golan and trying to get back into the swing of writing. With my last Birthright group of the winter season here (yes, Virginia, we still have groups, even in March (ehhhh….mi zot Virginia???)), I decided to spend a day with them. And when a day with the group means a day not in the office (along with accommodations and touring paid for by your employer), why the heck not? I tried explaining to one of the participants that getting to hang out in the shetach (field) was a chupar but I couldn’t think of the appropriate English word. Bonus? Treat? Food processor? Help me, people.

I’d post some pics here but uploading pictures means getting off my tooseek and looking for my new camera’s software installation CD, and that just ain’t happening at 10:46 PM. How about a picture of my goofy winter hat, along with my friend Emil and his matching goofy winter hat? 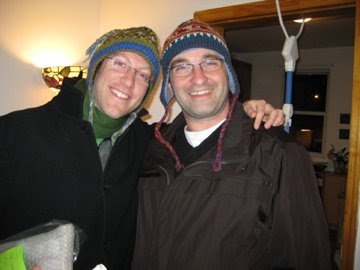 Prospective olim, you get one of these on your Nefesh B’Nefesh flight
(winter only, summer arrivals receive Kabbalah-themed banana hammocks)
This morning, I hiked Nachal Gilabun (yeah, I know it’s in Hebrew but it’s the closest link I found) and then continued to the Har Bental overlook of Syria. But more importantly, on the drive home, I stopped at Aroma about one minute south of the Kinneret. Amazing how you forget about non-kosher Aromas after even a little bit of time in Jerusalem. Good Lord, the chicken sandwiches and salads are delish. If we can figure out how to justify a Shabbas elevator, we can’t figure out a way to legally serve milk and meat together in Jerusalem in the year 2009? Seriously? C’mon, Reform Jews, make it happen.

I had a sandwich with chicken and avocado and whatever the hell I couldn’t see while eating in the dark while driving. Perhaps a little light would have prevented me from spilling coffee all over myself (when I lifted cup to lips, apparently the hole in the lid was nowhere near my mouth, thus, hafuch in lap.) By the way, Perez Hilton just reported that the new John Mayer album is to be titled “Hafuch in Lap.” So I hear.

Do Israelis know how to eat while driving while steering with your knees or is that stricty an American skill based on our affinity for highway fast food? I don’t know how many times I ate a burger while driving between cities in Texas but it’s somewhere between one and eight bajillion. Aaaaaaaaaaaand, time to do my Ulpan homework.

Update: Tony, your comment reminded me about the spelling I saw on signs and maps: Gilbon. How in the world could anyone have come up with that spelling? Even if you choose the wrong vowel, don’t you have to know something belongs between the L and the B? I wonder what the origin is of using “o” instead of “u”. When I first moved to Tel Aviv, I thought the street was called bOHgrashov…I might have actually corrected somebody. Some of you probably saw the sign a year or two ago in the blogosphere that said “homos” instead of “chumus”.