Israeli drivers in Rosh Ha’ayin were met with an unusual sight Sunday evening, when a man dressed as Spiderman decided to use his superpowers to engage commuters sitting in evening traffic. Several drivers on the scene called the traffic police hotline to report the superhero’s unique participation in the traffic jam. The man leapt from vehicle to vehicle, occasionally attempting to lasso cars with an apparent ‘web’ made of ropes.

“Unique” participation? What, Aquaman was busy playing matkot at the beach?


Policewoman Ayala Cohen and police volunteer Uriel Dozriv arrived at the Rosh Ha’ayin junction, only to have their police car assaulted by a ‘spider web’. The two were able to subdue the man easily, upon getting out of the vehicle. 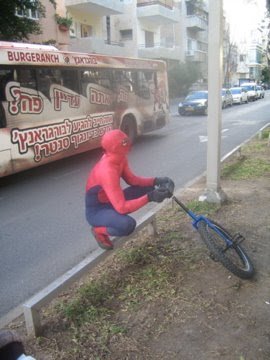 Here’s Spiderman on Rothschild Boulevard in Tel Aviv.
Dude, YOU CAN SPIN WEBS AND FLY. Lose the unicycle.
(Do you really want travel on our roads anyway? B’IMA SHELI.) 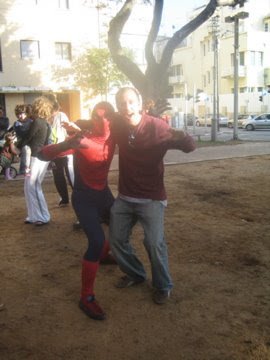 Never thought I’d be uploading this picture two years later but there you go.
(No, it’s not the Rosh Ha’ayin Spiderman. Just another random weirdo Spiderman.)

(Thanks, Shara and Mort!)