Posted at 11:19pm on Feb 2, 2009 in Current Events, I Love This Place, This Aliyah Moment is Brought to You by the Letter Aleph by Benji 0 Comments

Well, the results are in and the party I voted for didn’t get enough votes to claim a seat. I had to go to Tel Aviv to cast my vote since I didn’t register in Jerusalem early enough and despite not seeing a heck of a lot of Hayeruka Meimad banners in the Holy City, they were all over the City that Never Sleeps (But Always Sweats).

Voting for the first time was pretty exciting, except for the actual voting part which took a grand total of 1.28 seconds. Just like everyone described, I walked into the classroom in the local high school, walked behind the little divider (even more low-tech than a booth), and placed the little slip of paper for my party of choice in the envelope. With only a small piece of cardboard separating me from the volunteers, it would have been tough to pull out my videocamera and narrate without having them, aleph, stop me in the middle or, bet, call the Betty Ford clinic to admit me. (Then again, Betty Ford in this country is something else entirely.

And on this note, it’s very strange to me how most restaurants here don’t have a website. Even when I Google something in Hebrew, as I just did for בתי פורד, I only got listings on aggregator sites like 2eat.co.il or mouse.co.il which pretty much only list an address and phone number. ANYWAY, Betty Ford is a restaurant as is Carmela Soprano. This should be its own blog post.) 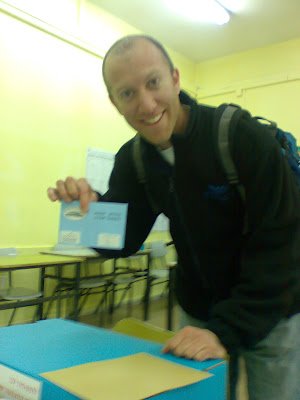 Some dumb oleh casting his vote.
How do you spell “Perot” in Hebrew?

Did you Diaspora-niks know that election day is a day off here? That’s nice. As is the free transportation given to me in order to get to my polling place in Tel Aviv from J-town. And thanks to a phone call from one of our War Zone field correspondents, I was informed that Hayeruka Meimad’s #1 representative, Rabbi Michael Melchior, was actually hanging out outside one of the nearby voting centers not far from where I was.

Here’s our exclusive interview about the environment, Jewish education, and Bar Refaeli (you’re not seeing this on CNN, people) It’s pretty good audio except for the brief gust of wind and the dog who was barking like he was paid for it. (What’s the going rate on barking dogs these days? 10 shekels per woof?)

Moreover, here’s an interview with the #2 person on their list (were they to win 2 seats), Eran Ben Yemini. They were both great sports (obviously!)

See you at the voting booth in 2 more years!

(And if you want to know what I really think of Bar, who graces the cover of the new SI swimsuit issue, read this.)