Posted at 2:12am on Jan 1, 2009 in Current Events, I Love Hebrew, Israelis Make Me Laugh, Now I'm Just Being Silly, The War Zone by Benji 0 Comments

CNN said so, people, so it must be true. In fact, my camel Chumus-hump just took two bullets to the solarplexus. EVERYBODY FREAK OUT!!!!!!!!!

I don’t want to cause mass panic here but this conflict has turned nuclear. Even though you may not see it on most news channels, I have proof from the cafe at the entrance to Binyanei Ha’uma, the Jerusalem convention center. Check this out. 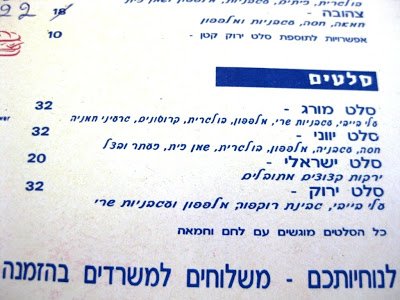 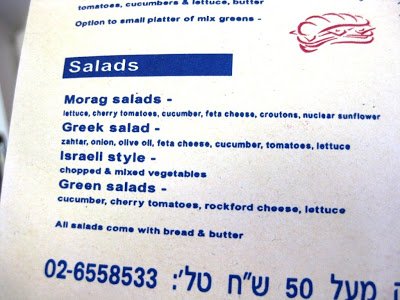 WHAAAAAAAT?!?! NUCLEAR SUNFLOWER??? WHAT IN THE HELL ARE THEY PUTTING IN THIS THING???

Could the IDF be passing military secrets through the menu of a non-descript eatery? Are they no longer passing them through tacky Israeli t-shirt messages which clearly no native of this region can understand? And are we planning to use this salad? And if so, does my kupat cholim cover any effects of nuclear fallout? If I grow a second head, I hope it knows how to read my bank statement.