Posted at 6:52pm on Dec 12, 2008 in Benji's Getting Serious, Current Events, Life on the Home Front, The War Zone, This Aliyah Moment is Brought to You by the Letter Aleph by Benji Lovitt 0 Comments

So let’s address the 800 pound gorilla in the room, shall we? It’s 1:09 in the morning and I’m still awake from a cup of Taster’s Choice. (Seriously, how can we be considered a 1st world economic power when we’re drinking instant coffee from the 1980s? Why don’t we serve Fruit Roll-ups and Cheez Doodles as well while we watch “Press Your Luck”? Did I mention that it’s 1:11 in the morning….don’t know what’s going to happen here.)

Yeaaaah…so that gorilla would be the impending whatever going on in Gaza. And as we all know, you can’t spell W-H-A-T-E-V-E-R without W-A-R. I’ve been writing on this here blog for almost two-and-a-half years with barely a hint of politics and current events but there would be something a little disingenuous about logging on today and making light of falafel and pushing in lines.

What to say? It wasn’t so long ago that the Lebanon War was ending, right when some dumb oleh was moving here and writing the third post ever in his new blog. That was a couple of years ago, a blink of an eye in the Middle East where change happens slowly. And why wouldn’t it? We’re talking about a clash of religions, civilizations, narratives, values….

I spent a few hours today at my friend’s house in Rosh Ha’ayin, a city in Central Israel, not terribly far from Tel Aviv (thank you, rental car for work.) As my work phone started beeping, my friend Idan helped translate the text messages from my company’s security department: Israel had launched an offensive in Gaza. A few minutes later, we were watching the news, as Israelis are accustomed to doing in times like these.

It’s weird….when there are issues connected the military or national security, it gives me pause. As an oleh, you’re always stepping out of your body and mind to judge, evaluate, assess your place in this country as an Israeli-in-training.

I feel Israeli when I party in Kikar Rabin for Israel’s 60th.

I don’t feel Israeli when I can’t relate to the gravity of the day on Yom Hazikaron.

I feel Israeli when I welcome my Birthright groups, give an expectations talk, and make eye contact with the tour guide because we’re thinking the same thing when one of the participants says something particularly interesting or funny.

I don’t feel Israeli when I don’t feel so different following the news here than I did from the States.

I’ve talked about this stuff before. From that third post….

Although I’ve been here a lot of times and have a lot of Israeli friends, I haven’t suffered yet or felt the pain of an Israeli. I have a feeling that only when the matzav (the situation) affects me personally will I have a full understanding of what it means to really be Israeli.

And from my first Yom Hazikaron…

As they joined the performers in song, I realized that, as powerful as the moment was, I was appreciating it from the perspective of an outsider. Israelis would probably tell me I’m lucky to not be able to appreciate what it means to mourn a lost family member, friend, or even distant acquaintance…and they’re right…but I probably represent all immigrants who yearn for the day when they too can understand what their fellow citizens are going through on a day like this.

I felt that feeling again today watching the news. While rationally I know that what happened today was a big deal, especially considering the number of casualities, there’s still an emotional disconnect. Gaza feels like a world away and I don’t know what it means to live in a country that could be in a “whatever” on its own soil. According to people who know stuff, it looks like we may find out in a couple of days.

I haven’t talked to so many people yet to get my finger on the pulse here but I imagine there’s a lot of 2006 going on. No one wants war, no one wants mass civilian casualties on either side, but at the end of the day, there’s a lot of “what do you want Israel to do?” and “What would any other country do?” when bombarded by missiles. I have yet to hear any alternative suggestions.

So now we wait, we hope for quiet, and pray for the soldiers who are defending us.

On a somewhat related note, it may not have made the international news but there was an explosion this weekend in my apartment. It involved a sufgania and left me covered with jam. Casualties included a chair, my green H&M sweatshirt, and a pair of jeans. 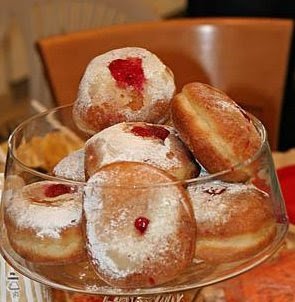 How many people will suffer at the hands of these things?
WHEN WILL THE CYCLE OF JELLY END???


Sorry people, there are only 2 days of Hanukkah left. I was running out of time to post this. Hope I didn’t just kill the mood. Israel’s an emotional roller-coaster, didn’t you know?

6:43 AM Update because I can’t sleep: I feel Israeli when something happens and I proclaim “OY oy oyyyyyyyyyyy!” Or maybe I just feel like a Polish grandmother.


“What does it matter where they say the rockets will come from?” Agron continued. “Iraq, Gaza, Iran – nothing’s going to happen, and I won’t be caught running around, not for a gas mask and not for a bomb shelter.”

My loyal readers know exactly what that is: IT’S OUR GOOD FRIEND YIYEH B’SEDEEEEEEER!!!!!!