12/17 Comedy Show at the Dancing Camel

Hey, did you hear the one about the guy whose MacBook charger died? Yeah, not so funny. Especially when the one Apple store in Israel is waiting for the shipment. After 5 days of no laptop, I found someone with an extra so we’re back in business, baby! Unfortunately, it’s late and I’m tired so how about we reconvene at a later time? I’m thinking Wednesday….yes, Wednesday.

Getting pushed in line got you down? Frustrated with our government? Then come out to Tel Aviv’s Dancing Camel brewery for a night of great beer and laughs with your friends.

Some dumb oleh who writes a blog, featured on Israeli TV and radio and you know where else. Other comedians also to perform.

Starts at 9:15 PM at Hataasiya 12 near HaMasger. Email israelfunny@yahoo.com for a reservation. I think it’s going to be crowded. 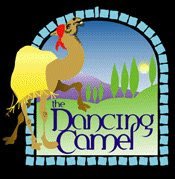 Ever seen a camel do the mayim step? It’s quite impressive.

See you there, readers. Let’s go, Tel Avivim-show up and represent.