Want to know what’s HOT? My cable company, that’s what’s HOT. It’s either that or YES, the two choices of cable companies in Israel. I haven’t had cable in the two years I’ve lived here…well, not until now anyway. My two roommates have cable which means that I have no more excuses for not sitting my tooseek down and watching the news in Hebrew to learn a few things. (I find tooseek to be a funny word. It’s not so different from the Yiddish word tuchus but it amuses me for some reason. Maybe because people in America don’t really use tuchus in normal conversation but tooseek seems to be the actual word, as far as I know. Or maybe just because Hebrew makes me laugh.)

Today, I realized that “The Office” was on Bip (pronounced beep), the Israeli comedy channel. No subtitles to practice reading Hebrew; oh well. Anyway, this reminded me of a conversation I recently had with my Israeli friend Eitam about the Israeli sense of humor.

It’s actually come up in conversation with a few people recently, how Israelis don’t get sarcasm and irony. I haven’t figured out exactly what it means but since at least three people have repeated it, there must be something to it. Apparently what most people here like about “Seinfeld” is the slapstick of Kramer, for example, and less the dialogue and discomfort from many of the situations that unfold.

I asked Eitam, “So you’re telling me that Israelis just don’t get shows like ‘The Office’ or ‘Curb Your Enthusiasm’ and all the awkward things that Michael or Larry David say to people?”

His answer? “Most Israelis don’t find those situations uncomfortable because Israelis would say all those things. It would be funnier if the character didn’t say them!”

Whoa. That’s scary. Does that mean Israelis aren’t shaking their heads laughing at this story? I know I laughed, and believe me, NOT because it’s ok. Exactly the opposite…because you just don’t know what else to do. Maybe the same reason I laughed after almost getting hit the other day. What are people thinking in this country at times? 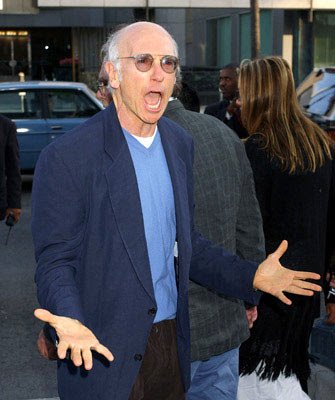 I don’t get it….which brings us back to bullet point #2 here.