Posted at 6:33pm on Nov 11, 2008 in Benji's Getting Serious, Culture, I Love Hebrew, I Love This Place, Jew Stuff, This Aliyah Moment is Brought to You by the Letter Aleph by Benji Lovitt 0 Comments

Hello, my loyal readers, from the center of the Jewish world! That’s right, it’s everyone’s favorite annual event….the Beersheva Dog Show! To those of you who didn’t just get Rickrolled, it’s the UJC GA 2008 (General Assembly). (And for the Hebrew-speakers out there, rik-RAL-ti otchem. You’re damn right I just conjugated it. We’re only one paragraph in and the fun’s already begun. Did I mention it’s the GA 2008?!?) This is a good, meaty post, just like you like it, people, coming straight from the War Zone. Let’s do it.

Thanks to my favorite boys and girls at Nefesh B’Nefesh, I was one of the lucky ones selected to spend my Sunday shmoozing and representing the immigrant population at the biggest gathering of Jewish leaders this side of the Jordan River. The GA is the annual event of United Jewish Communities, the umbrella organization of the Federations, which raises oodles of cash for all sorts of Jewish institutions in America and Israel through its Super Sunday solicitation, missions, etc. To celebrate Israel’s 60th, it’s taking place not far from my new digs. 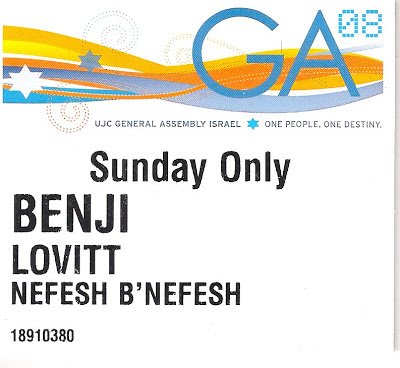 Sunday only? (All together now…)
Come on, Nefesh B’Nefesh…HOOK A BROTHA UP!

Before the event officially kicked off Sunday night, the day leading up to it was labeled “NextGen” and devoted to the young demographic of Jewish leaders which I apparently still fall into. With all the talk about the next generation, I fully expected the event to be co-sponsored by Pepsi. 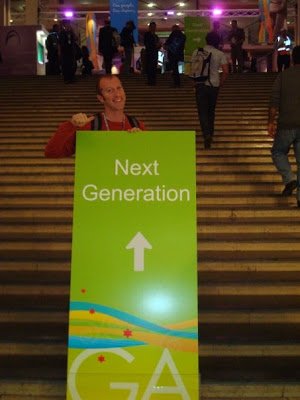 Be afraid. Be very afraid.

From the moment I arrived, it was clear what I had gotten myself into: quite possibly the biggest Jewish networking event ever (eat your heart out, AIPAC policy conference.) The day kicked off at Yad Vashem where several hundred of us listened to some opening remarks and ran into an incredible number of familiar faces. By 9 AM, I had already run into an ex-girlfriend/roommate, a camper I hadn’t seen in 15 years, someone who reads my blog who I’d never met, and a ton of others. Living here for two years gave me quite the perspective: is there a more American, or American Jewish professional, activity than power shmoozing at one of these conferences? The Amazing Race should create a version where your goal is to exchange as many business cards as possible in a 24 hour period. “Ready? GO!”

I also became conscious that I was one of the few wearing jeans. Guess what? I’m Israeli. Yiyeh b’sedeeeeeeeeeeer!!!!! 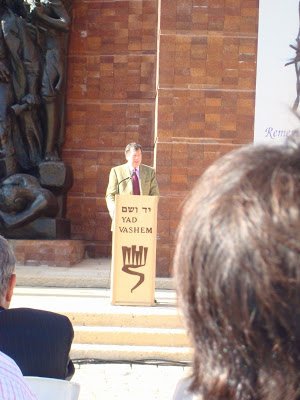 Edgar Bronfman gets his speech on. E-Bron, if you’re reading this…umm, can I go out with your granddaughter? Grandson? Cleaning lady? I’m not picky. 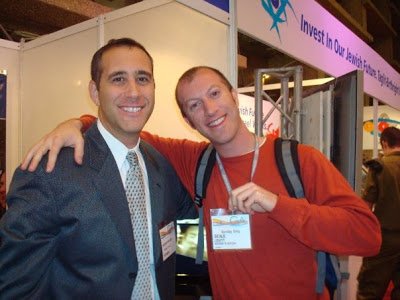 Recognize the man on the left? It’s the godfather of Nefesh B’Nefesh himself. Ten points to the first person who can name him. And so many accomplishments by 36! (I can’t stop kvelling.)
My bus, made of mostly of MASA-niks from Otzma and the Israel Government fellows, heads to Hadassah Hospital to visit the emergency trauma wing, the children’s ward, and to hear a lecture about stem cell research that required a degree from Harvard Medical School to follow. When I turn around, three people are sleeping. Reminds me of my Israel tour when I was 15. Ahh, the memories. They could screen the next Star Wars movie here and half the group would fall asleep.

We learn that in Hadassah Hospital, Arabs and Jews are treated and cared for equally, with no one being asked where they’re from or what they believe. A patient is a patient. And the pediatric ward is pretty amazing, where they’ve created an environment designed to make kids feel as comfortable as possible with toys and colors decorating the lobby and walls. Apparently every floor has a different animal so the kids remember where are. Kind of like that “Seinfeld” when Jerry suggested that the floors in the parking garage should have different names like “Your mother’s a whore.” I’m guessing we won’t be seeing Farfur and his merry friends. (I’m not gonna lie, I love a good Farfur reference.) Walking through the hospital, I run into a guy I haven’t seen since college, easily ten-plus years ago. His UT hat gave him away, he’s on some kind of mission, and guess what? He reads the blog. Too funny. I love the GA.

Off to Binyanei Ha’uma for breakout sessions. Mine is about Israel Today. Interesting stuff. I run into a guy I hosted while working at the Israeli Consulate in Atlanta almost six years ago through Israel at Heart. This is getting ridiculous! But we’re just getting started apparently. Everything is leading up to the big evening, the kick-off event for the GA, where Prime Minister Olmert is to speak.

Talk about security. The normal metal detector and X-ray machines, plus some other measures. It took quite a while to pass through which gave me time to run into my old boss, the former Consul General in Atlanta. Hilarious. B’ima sheli, who’s NOT at this thing? I think I just saw Cain walk by. (And if you think I’m not excited about my #1 Google ranking for “b’ima sheli“, then you don’t know me as well as you thought you did.)

Once we get through, there are falafel-load of sponsored booths set up which leads to more good shmoozing and more ridiculous Jewish geography run-ins. 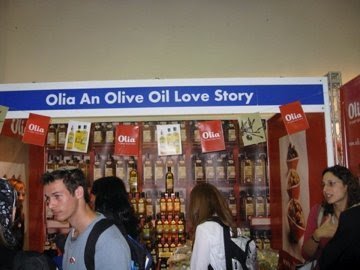 What’s with all these Israeli food love stories? We’ve already talked about barbeque and grill. 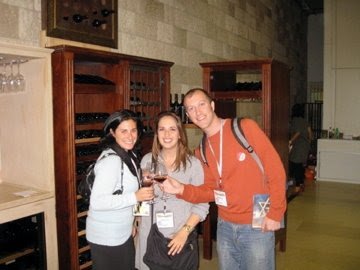 Mmmm…Israeli wines. A big todah to my photographers Esther and Amy. I really need to fix my camera. A blogger without a camera is like a moil without a…whatever the hell they use to chop a baby’s weewee.
The only down part of the day was dinner. There were two options: hot dogs with sauerkraut at one table, and chili, chickpeas, and chumus at the other. If you listened closely, you could almost hear someone saying: “Tomorrow, you will be the leaders of the Jewish people. But today? YOU’LL EAT LIKE DOGS, NEXT GEN!!! HA HA HA HA!!!!” That sucked. Let’s move on.And finally? The big event. A few photos. 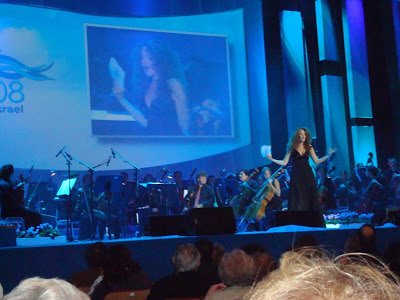 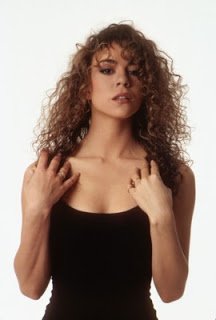 Did anyone else notice a resemblance between the MC and Mariah Carey, circa 1991?
It’s all about the hair.

We heard three national anthems and I’m telling you, after living in Israel for two years, it’s a little weird to hear the upbeat “Star-Spangled Banner” after singing the emotional “Hatikva”. Here is what everyone in the audience was silently thinking to themselves. 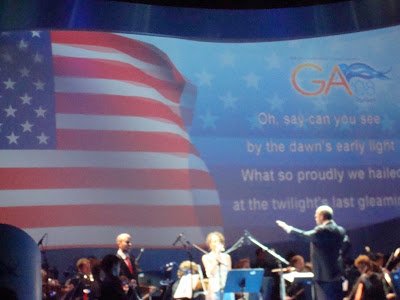 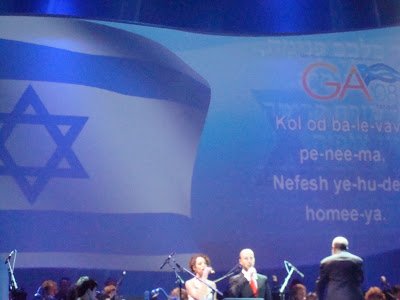 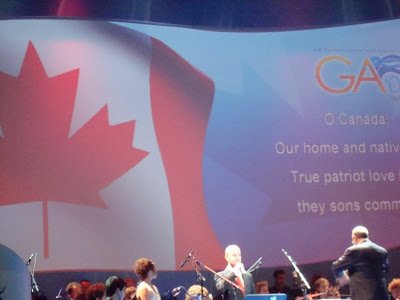 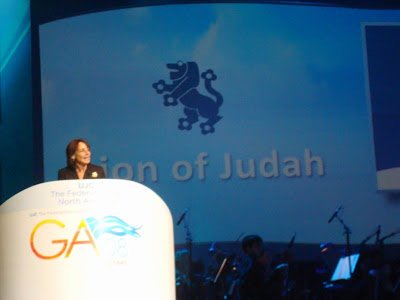 Speaking about the Lion of Judah club, a group of women who give more than $5000 annually to UJC. (Is it just me, or is that lion doing the robot?) She mentions something about raising “sixteen MILLION dollars!” I put my pinky up to the corner of mouth. Friend laughs. 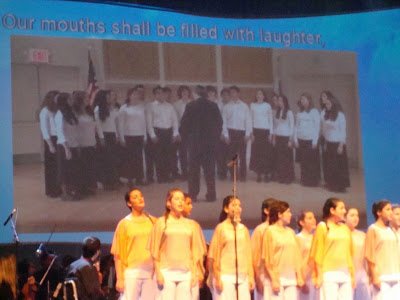 Through the wonders of technology, we watched a choir in New York sing together with this group of kids onstage. With special effects today, it’s a little hard to know what’s real these days. What’s even impressive anymore? I would have enjoyed it much more if the American group broke out into “Living on a Prayer.” 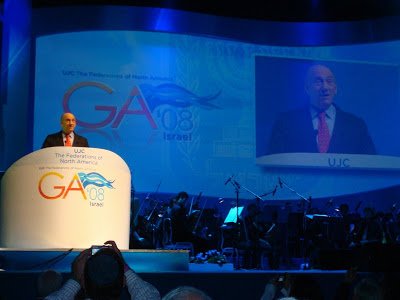 Ooh, picture in picture! How do we put on the Cowboys-Skins game?

Olmert speaks about Israel being the one home of the Jews (hear that, Upper West Side?) He mentions MASA to loud cheers, then Birthright, Otzma, and KolDor. Hey, what about NBN? That was the biggest snub since Hilary Swank forgot to thank her husband after winning an Oscar. His message was nothing earth-shattering but important nevertheless, that a strong Israel is important for the future of the Jewish people.

And what would a big gala event be without super-cute kids? We were treated to an adorable song and dance number by a group of young, Ethiopian girls, a violin performance by two young Russians, and these twin boys on clarinet, although that might just have been my vertigo kicking in. 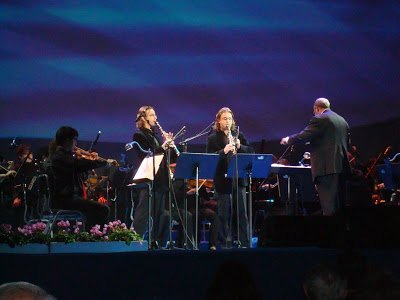 And that pretty much drew us to a close. The day was an absolute blast for me, seeing a million and one people I knew from now and WAY back when. It really did feel like the best Matza Balls* I attended where there was an inverse relationship between the number of people you speak to and the number of seconds you’re capable of paying attention to them before you’re off to the next person you know. When I tried explaining it to my Israeli co-workers, I felt like they weren’t really getting it. Perhaps part of it was going back to a past life as a member of the American Jewish community where being a community professional means being a member of a family where, while you may change jobs or cities, you can never get too far away. And it can be a really fun and amazing family to be a part of. Between growing up in Young Judaea, being active in Hillel in school, and working in the Jewish world in the States and in Israel (not to mention socializing in Jewish circles), I certainly have met a lot of people, and great ones at that who are equally passionate about Israel and being Jewish. And maybe I just missed shmoozing with others who are like me. Bottom line, I don’t know how the rest of the week will turn out or what people will take from it, but for one day only, I had a great time reconnecting with people.

And what’s a big Jew party without these important ladies? Here I am with “Charlie’s Angels”, otherwise known as Hadassah. “Good morning, Angels!” Can you say “protectsia“, boys and girls? I knew you could. 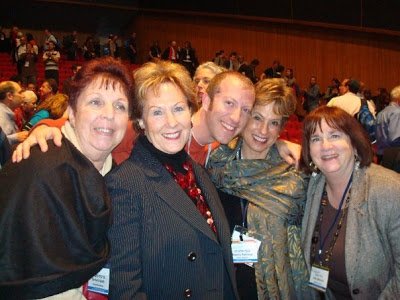 Don’t mess with these ladies. Even THINK about crossing them and they’ll have a new hospital wing built in five years.
And with that, let’s bring this GA wrap-up to a close. If you haven’t given to your local Federation in the past, this might be a good year to start. As they say, “Live Generously.” And UJC….if you’re looking for some worthy places to allocate your money in Israel, I can offer a few suggestions. I know one blogger who could use a new camera.Ready? SHMOOZE!!!!*Matza Ball: the big Christmas Eve party in every American city where all the Jews meet and party due to the lack of anything else to do. Involves a cover charge and seeing everyone you ever knew from that city.