Good morning, my loyal readers! Have you worked up a hearty appetite yet? If you have and you’re craving a good hamburger, you have a few options. I personally don’t love hamburgers so much here as they just don’t taste the same as good American burgers in my opinion. In Tel Aviv, I know of a couple places which are pretty popular nonetheless.

Moses is on Rothschild Boulevard and is a happenin’ late-night place to eat. Not my personal fave but pretty popular among most people. Then there’s Agadir Burger Bar, and holy falafel balls, I’m a bit surprised that Tel Aviv restaurants are written up in the New York Times. Wow. I’ve had some satisfying, tasty burgers at the Nachalat Binyamin location, not so much for the meat itself but more all the toppings you can get: fried onions, guacamole, mushrooms…whatever you might get in the States. But there’s something else about Agadir that makes their burgers taste a little better. Umm…how shall I put this? Did anyone ever notice anything unusual about the waitstaff? Namely, that they’re smokin’ hot?!?

No joke-a friend of mine told me about it and I was able to track one down. While Hooters may be uncouth, everybody knows that the point of the restaurant is to objectify the women. THIS IS A NORMAL RESTAURANT! Gooooo, tackiness! (Yeah, so it’s from 5768. Deal.)

For some reason though, on top of the inherent tackiness, I feel like they messed it up. They decided to make a calendar to showcase their beautiful women….but instead of the expected skimpy clothing shots, they just picked photographs with them doing really weird things. Let’s have a look… 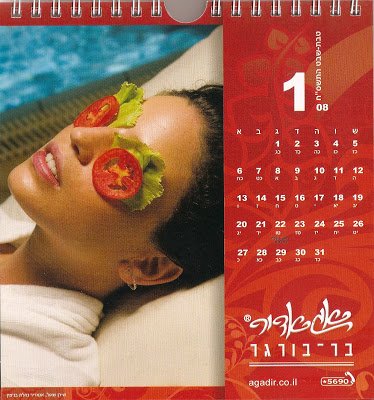 I know that health regulations in this country are more lax than in America but this is ridiculous! (It may also explain why the vegetables here have so much more flavor.) 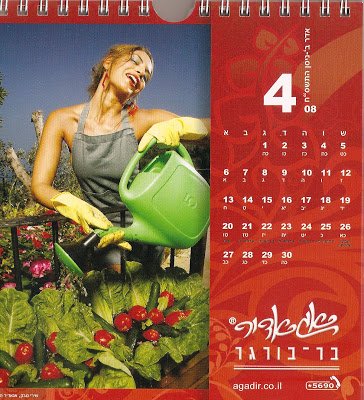 I gotta be honest…I never found gardening to be nearly as much fun as this woman makes it out to be. What in G-d’s name is WRONG with her??? 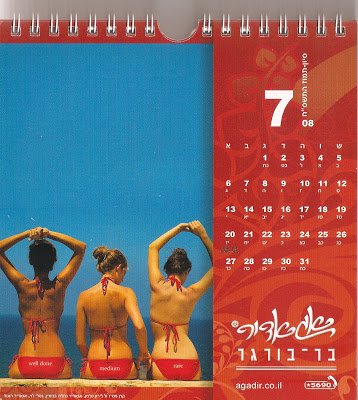 No wonder it takes so long to bring me a glass of water. For the love of G-d, GET THE HELL OUT OF YOUR BATHING SUITS AND GIVE ME SOME SERVICE!!! WHAT THE HELL IS GOING ON IN THAT KITCHEN??? 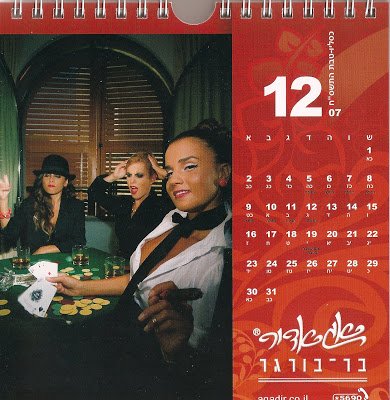 Not only is the five-ace waitress not to be trusted, she’s also smoking a cigar. Another has her hands in her hair and another has one hand beneath the table.
Suddenly I’m a bit uncomfortable with them serving my food.

So there you have it, the Agadir calendar. I found it to be a little disappointing frankly but trust me, it’s worth a visit. For their burgers, I mean.