The Idiot’s Guide to Finding a Job in Israel

Posted at 8:04am on Sep 9, 2008 in Culture, I Love This Place, Israelis Make Me Laugh, That Thing That Pays the Bills by Benji 0 Comments

Thanks to those of you who “voted” for me in the JobMob contest. Here’s the entry which won in its entirety.

With the shekel’s value continuing to strengthen, it’s good times all around in the Israeli economy. A land known too often for politics and conflict is slowly becoming recognized for its hi-tech and innovation. With new opportunities all around, it’s a hot job market out there and potential candidates can make or break their careers with their next job offer. But look out, Western immigrants-just because you came from a Fortune 500 company doesn’t mean you’re ready to play ball in the Middle East; there are cultural differences after all. Without further ado, I present to you The Idiot’s Guide to Finding a Job in Israel.
Where to begin?
Before you’re ready to land the dream interview, you better get your resume in order. Do know that whereas long gaps in employment are frowned upon in many Western countries, you need not worry in Israel.
Interviewer: “Ehhh….waht eez dees three month break een between jobs?”
Candidate: “India, nu?!”Interviewer: “ONLY three months? What eez wrong weeth you?”
You may also want to fix any misspellings. If you are applying however for a position in menu or street sign creation, please disregard the previous sentence. 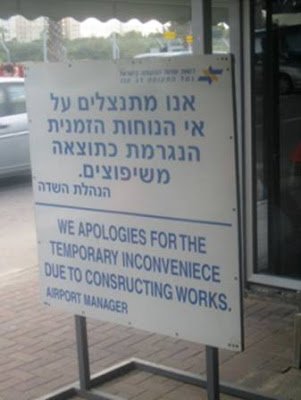 Ready to start searching?
Great, let’s go! Uh oh….proceed with caution. Like the American hiring process which comes to a screeching halt between Thanksgiving and New Year’s, Israel too has its slow season, taking place just before “acharei hachagim” (after the Jewish High Holidays) and lasting about five times as long as the actual holidays. Occurring in September and October, this phrase roughly translates to “you have a better chance of swallowing a basketball whole than getting anyone on the phone.”
Candidate: “Ehh, ahr you hiring?”
Company Rep: “I ehm soh-ry, we ahr veh-ry busy right now.”
Candidate: “Why, are you about to go public?”
Company Rep: “Ehhh no….Shemini Atzeret with Doda Tzipi. Her ketzitzot are makseem!!!”

Despite the “acharei hachagim” answer, you might get lucky. Typically, you can expect a job to be offered to you after either one day or six months.
Getting your foot in the door
So how does someone get an interview anyway? The Internet is a great place to look for jobs in the Western world but should be avoided in Israel at all costs (unless you are a freier.) It’s all about Vitamin P here. (If you’re looking in Superpharm, you obviously have none.) 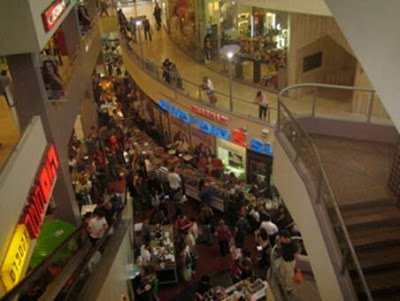 Vitamin P is short for “proteksia” or “having connections”. Knowing someone high up typically helps. Of course, “someone” can also be defined as the “son of the brother of the girl who used to date your uncle’s cousin”. When questioned, you should pretend as if this person is the best friend you have ever had and refer to him as a “gever” (guy) or “ach sheli” (my brother) at least 37 times in discussion. If you pull this off believably, congratulations, you just landed yourself a job.

The Big Day
Yikes! You’re interviewing with the boss in one hour and you haven’t a thing to wear! Take a deep breath and check your closet again. See those jeans? No, not the Tel Aviv pair with the hole in the crotch. The nice jeans- put them on (the other ones you can wear once you’re hired.) For the ladies, cleavage is also encouraged in the Israeli job interview and workplace. Here’s a typical office exchange:

Those of you from other countries may be surprised to learn that there is no such thing as an inappropriate question here. Whereas questions about sexual orientation, religion, or family aspirations are grounds for a lawsuit in other countries, in Israel these topics are called “the first five minutes of the interview” and are apparently encouraged. If you’re expecting to be asked where you see yourself in ten years, forget it. This is Israel, people-nobody knows what they’re doing Friday night, you think they’ve made plans for 2018?

Of course, you should fully expect to know someone in common with the interviewer. And if not, you will. Because even if you didn’t get the job, there is roughly a 57% chance that you’ll be offered a date with the CEO’s daughter. Whether or not you accept, just make sure not to burn any bridges. You never know- you could be doing miluim (army reserve duty) with the interviewer six months later.

RIIIING! Mazal tov, you got the job! We’ll see you at 10 AM on Sunday. Wait… are you thinking about getting pregnant?