This Day in History, Brought to You by the Letter Aleph and Rotem the Ars

Posted at 12:00am on Aug 8, 2008 in Benji's Getting Serious, I Love This Place, Life on the Home Front, This Aliyah Moment is Brought to You by the Letter Aleph by Benji 0 Comments

Editor’s note: After publishing this post, I realized that I completely failed to take into account that today is Tisha B’av, the day where we mourn the destruction of the 2nd Temple, along with many other tragedies throughout Jewish history. While I almost always do a holiday recap, I will probably not be doing one today. (Check out Jewlicious if you’re interested.)

Nevertheless, this post marks a different historical event. Unfortunately it falls on Tisha B’av but I’d be remiss if I didn’t write about it. Perhaps I should wait till tomorrow to post since it’s far from being in the spirit of today but then again, I don’t think my readers are coming here for good taste and appropriateness. Anyway…here we go.

Famous August 10ths throughout history with the help of Wikipedia:

612 BCE: Killing of Sinsharishkun, King of Assyrian Empire and destruction of Nineveh. I still haven’t gotten over this.

1519: Ferdinand Magellan’s five ships set sail from Seville to circumnavigate the globe. I’m sure his wife took that well.

1924: The Gold Cup of the prestigious Cheltenham, England is established. Townies join together to usher in the era of cheltenham betting on horse races. The organizers kick off the first race by bashing a gold cup into the winning jockey’s nether regions. This tradition proves to be short-lived.

1943: Zelene Lovitt (nee Wasserman) is born. Happy birthday, Mom! (How long has “nee” been around? I had never heard this word in my life until just a few years ago.)

1977: In Yonkers, New York, 24-year-old postal employee David Berkowitz (“Son of Sam”) is arrested for a series of killings in the New York City area over a year’s period. (By the way, I can’t believe at this age, some people still make snide comments when I tell them I’m from Texas. “TEXAS?!? (sneering) So you’re a Bushie, are ya?”

Huh?!?! You’re indicting millions of people because of one guy? I’m going to start reacting to New Yorkers like this from now on.

2000: World Population reaches 6 billion. Seriously, how in the HELL do we know that? How’d you like to be that census taker? “Five billion, four hundred seventy-five million, three hundred twenty-two thousand, six hundred forty th…wait, was it three or four? DAMMIT!!!!” 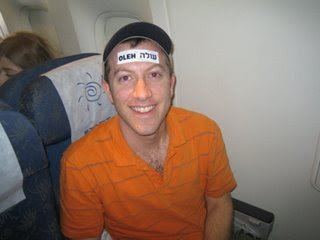 I certainly can’t imagine what I was thinking when I was on the plane. What was I thinking exactly? Let’s take a look back, aaaall the way to post #2 on this here blog.

When you’ve been mentally preparing for a move for so many months, especially for one that’s presumably exciting and meaningful, at some point there’s nothing more you can do than to relax and enjoy it. Everything’s done-I just had to get in the cab and head to the airport. (Check back in with me in a few days when I’m having to buy furniture, grocery shop, and figure out how to translate “Doctor, my small intestine is inflamed.”

Update: I didn’t have an inflamed small intestine but I did get diagnosed with blepheritis. That was fun. I’ve actually had pretty good medical experiences thus far including the time when my doctor turned into an ima Polania in front of me, telling my friend Michal that she needed to pick me up and take care of me. You ain’t gettin’ that with Blue Cross Blue Shield, my friends.

it hasn’t sunk in that I’m starting yet another chapter of my life but after moving to New York, how big of an adjustment can it be?

As local media and passengers took pictures, one of the speakers said “you’re moving from the sidelines of Jewish history to center stage.”

Update: Yep. No doubt about it.

And one more, this from my essay to Nefesh B’Nefesh:

Since that time, my personal and Jewish identities have been defined by Israel: its people whom I have always admired for their presence on the “front lines”, personally committed to the survival of the state of Israel; the same people for their unconditional warmth and steadfast optimism through the hard times (“yiyeh b’seder”);

Update: NO, I DIDN’T!!!! OH, YES I DID!!! (After not reading this for more than two years, I couldn’t believe I actually wrote you-know-what.)

If you live here, you know what this all means. It seems like not a day passes where we olim don’t talk to each other or to native Israelis about all this philosophical when, why, how, and what will be in the future. In a lot of ways, this is just another place. And in a lot of others, this is like no other place. No matter how many times you visit or even stay for an extended period of time, nothing can prepare you for what it means to live here, to celebrate the holidays here, to have the “we’re all in this together” feeling, and to feel like you can have so much to talk about with your Ethiopian bus driver who calls you achi (my brother) and shakes your hand as you get off the last #18 bus before Shabbat after he tells you he saw you on television (video coming eventually). If you don’t live here, I don’t think you can truly understand what I’m talking about. And if you do, you can. It feels pretty good to be part of the group who does.

Rather than writing the 480 page dissertation that this occasion warrants, I’ll leave it at this:

To all my fellow Israelis, here’s to more good times at the beach, delicious brunches on shishi Shabbat (Friday/Saturday), and whatever we happen to talk about over a cup of cafe hafuch.
To everyone else….what are you waiting for? 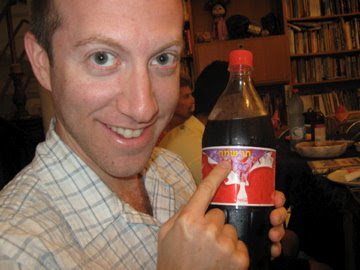 Does your Coca-Cola wish you chag sameach?
If not, it might be time for a visit.

You’re still not signed up for email updates? Get with the program, nu!