Just Like the Day After the Oscars (With Fewer Celebrity Arrests)

So Bloggerooza 2008 (or as one friend of mine called it, “the Star Trek convention”) came and went last night and you wouldn’t BELIEVE what happened! (Ok, they served cold cuts. What, you were expecting Snoop Dogg to pop in?)

The Oscars has the red carpet and after-parties. WE HAD SPRITE, BABY!!! And seriously, bloggers in attendance, if I had an ars for every time that squeaky front door got my attention, I’d be Bat Yam. Come on, Nefesh B’Nefesh, you gotta get that fixed. If you had brought only one less American this past year, you could have installed a revolving door (and a disco ball in the big conference room. Like that wouldn’t have made the last panel more interesting. BLOGGING AFTER DARK! OOH LA LA!)
Those of you who are interested in some of the write-ups can find a few linked from Jewlicious…I promise something more later. 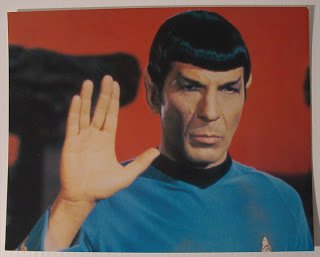 “Kirk! The Klingons have captured our supply of falafel balls!
WARP SPEED NOW!!!”

In the meantime, for those of you who saw the panel, here’s the post about Israeli weddings that the moderator referred to during the last panel. And here’s the still very recent Tu B’av video I mentioned if you haven’t seen it yet.

Anybody wanna translate this for me? We’ve cracked the Hebrew market, baby! Next stop? AL JAZEERA! (I’m HUGE in Yemen.)