In Case You Didn’t Hear, There Was a Blogging Conference. No, Seriously.

Posted at 12:00am on Aug 8, 2008 in Jew Stuff, Miscellaneous, This Aliyah Moment is Brought to You by the Letter Aleph by Benji 0 Comments

Just a few more thoughts regarding the NBN Jewish blogger conference (in addition to what I already wrote here…) Since this will mostly interest those who were actually in attendance (either physically or virtually) and everything has already been written to death, I’ll keep it short (always a relative term with me). If you want a more detailed minute by minute account, there’s a good one over at Mere Rhetoric. 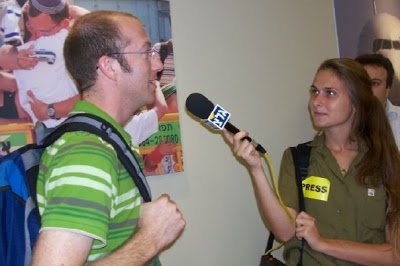 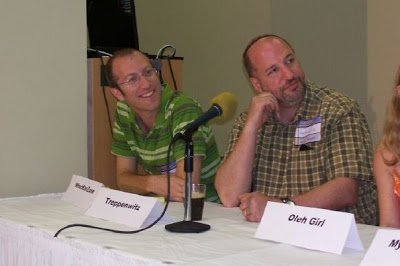 For those of you who weren’t there,
the big secret of this session?
Two words: no pants. 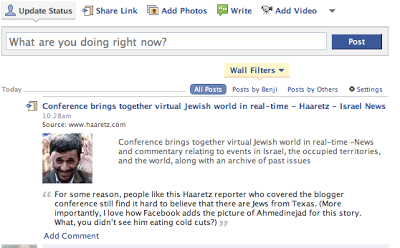 If you can’t read the caption, I love how Facebook added the picture of Ahmadinejad for this headline. What, you didn’t see him at the buffet? If I’ve said it once, I’ve said it a thousand times: ‘Moudy loves the pastrama. 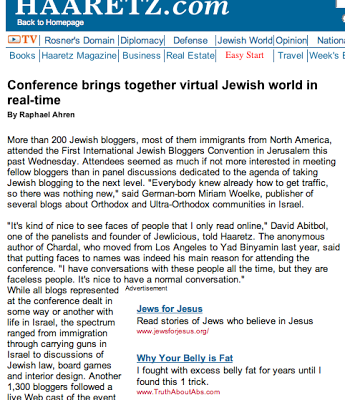 A Nefesh B’Nefesh conference gets written up and the first visible Google ad is….DOH!
You think somebody in the home office is pissed right now?
Personally, I’m more upset about being told why my belly is fat. How rude.

Much has been written on various blogs about how successful (or not) the conference was in achieving whatever it was it was out to do. In the end, at the very least, it was a pleasure to meet other people who both enjoy writing and living in Israel. Despite room for improvement, many of us walked out at the end in a good mood and excited about continuing to write. And happy, excited bloggers living in Israel probably correlates to continued good press and messages coming out of Israel. Ain’t nothing wrong with that.

Lastly, here is my interview from a couple weeks back, complete with subtitles. Thanks to new friend and video editor Tony for doing it for me.