Any 15 Year-Old Readers Want to Make Some Shekels?

So as I briefly mentioned last week, Nefesh B’Nefesh invited me to speak on Channel 1’s Hayom L’Machar (Today to Tomorrow) about the upcoming blogging conference. I was also asked to be on one of the panels (check out the link) and invite all of you to watch the webcast to see me discuss my plans for world domination through “yiyeh b’seder” references and pictures of bloody falafel balls (ech omrim “bloody falafel balls”?)

In an effort to add subtitles to the interview, I unsuccessfully played with iMovie on my Mac for a few minutes (it’s harder than you’d think.) Ziv, my computer genius friend, actually figured out how to more easily do it in Windows by importing a text list of times for each subtitle but ayn li koach to do this kind of tedious work late at night. If any of you teenage hacker genius-types want to make some extra shawarma money to beef up your college applications, contact me at which point I’ll throw it up on Youtube. In the meantime, here it is. 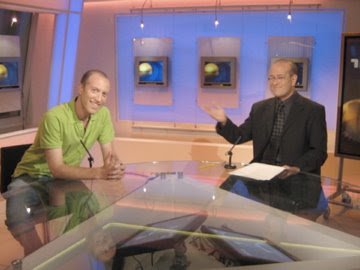 This is actually me at the Kotel.
I Photo Shopped in the TV studio.

For those of you who don’t speak Hebrew, the translation is below. Do make sure to watch till the last second when I make the host laugh.

I think this blog needs new categories. The ones I have are getting old and less appropriate. Hey, 15 year-olds-how about cataloguing all these posts and I’ll throw in money for a Pesek Zman as well. Teenagers love Pesek Zman.

Lovitt?
Lovitt.
Professor Diskin corrected first and said Levitt, right?
In Israel, we say Lovitt.
Good, welcome.
Thank you very much.
It was hard to find the building here in Jerusalem?
Just a little.
Why?
First of all, I got my Israeli drivers license yesterday but I don’t really know this city and in Israel, people don’t give directions like in America. It’s a little different.
The reason we invited you tonight is the first Jewish bloggers conference that is supposed to start the next week, the 20th of the month.
Right.
Here in Jerusalem?
Yes.
So you already know the drive.
This is a project of Nefesh B’Nefesh, tell me a little about this project.
Nefesh B’Nefesh, wow, thanks to Nefesh B’Nefesh, this is an organization which helps prospective immigrants to make aliyah, both before and after to give support and to answer all of our questions (and we have a lot of questions). And to be a shoulder to cry on.
(translates)
Exactly. Ah, you say that in Hebrew too?
Tell me…good, Benji, you’re also a stand-up comedian, right?
Right?
In America?
Yes, but more here.
Originally from Dallas, Texas?
Yes, correct.
From the Texas Book Depository? (He mentioned this earlier to me…something in his past).
No, but not so far.
How much time are you in Israel?
This week, two years.
You came during the war?
The last days of the war.
You got up and came to Israel in the middle of the war?
The end of the war.
And what did your mom and dad say?
My dad cried when I told him I wanted to do this but after my mom talked to him, he said “everything’s ok, we just want what’s best for you.”
And you said, “don’t worry, every day you’ll know what happens to me, I have a blog…what’s it called?
WhatWarZone.com
All in one word…WhatWarZone.com
(translates)
Where is the war zone, really?
There is no war zone, that’s the deal. There are so many people in the US and around the world that think we all have 10 camels each, terrorist attacks on every corner-
What do you write on your blog?
My goal is to show people abroad that this is not a war zone, there is no war, Tel Aviv is like New York, even safer, and my goal is that people who think of Israel will smile and not be in fear, they’ll know that this is a normal place and really funny.
How much does this blog influence Jewish Americans…you are secular, you’re not religious, you’re not traditional, you don’t keep kosher.
Right
Sometimes. How much does this influence, people like you, to try the process of aliyah?
It’s really important, that’s the goal of the conference, to bring bloggers together, and can we bring more readers and users around the world to read good things about Israel and I know there are a lot of people, hundreds of people, Jews and also non-Jews who read my blog and blogs of people who…
How do people arrive to read these blogs, do they receive from birthright a list of blogs? Information about people like you who have done this?
Portals with English blogs, word of mouth, people send them to each other, that’s the power of the internet, it’s very democratic and Israel is democratic, there’s a lot of types of bloggers: left, right-
Do you also get feedback?
Lots of reactions.
What, for example?
Someone said that because of you he made aliyah? Or because of something he read, he is not making aliyah?
Someone wrote, wow, I learn more about Israel than on any other site.
From your blog?
Yeah!
For example? What did you write there?
I like to write about the phrase “yiyeh b’seder (it will be ok)”, that is very funny to Americans, this phrase.
The first thing I asked you when you walked in the building, you immediately said “s’baba (awesome)”, how do you say it?
S’baba
It’s with a vowel at the beginning, sebaba. It’s very important to get the slang to be very Israeli.
Of course!
What do you think about Israelis?
Wow, very warm. There isn’t that kind of warmth in the States. Every day it surprises me. They’re not angry?
That’s really funny. They can not wait and cut in line but if someone accidentally hits you, he’s the first to pick you up and invite you for Shabbat.
And he’ll immediately be your friend. But the most important thing is to give directions like you need.
Wow, why can’t people give directions with street names? Straight to the end! What is that? What is that? (cameraman laughs) Really!
Benji Lovitt, we will meet again, I have a feeling, at the convention and also after, right?
Yes, the conference will be great, and if you can’t come there will be a webcast on the internet so bloggers from around the world can see…
If somebody wants to read you, WhatWarZone.com-
Right
Benji Lovitt, thank you very much to you.
Thank you.
Have a good trip returning to Tel Aviv and find the address easily.
Hi Mom….she’s not watching.
(laughs)

Update: The video with subtitles can be found here.