What Would You Do With a Million Shekels?

Posted at 4:39pm on Jul 7, 2008 in Now I'm Just Being Silly, This Aliyah Moment is Brought to You by the Letter Aleph by Benji 0 Comments

I had a conversation a couple of months ago with two friends about the biggest factors keeping American Jews from moving to Israel. One maintained that it was money while I argued that money was only an excuse and that if you suddenly offered not only the average American Jew, but also someone with a strong connection to this place, a salary equivalent to that in America, he’d find a different reason to not come.

Whatever the “main” reason may be, there’s no arguing that in absolute terms, salaries here do not compare to those in the States. Not here.

Now…this past weekend also happened to be July 4th, American Independence Day. If not for a few reminders here and there, I would have forgotten completely. In America, there are celebrations, events, and promotions. Not here.

To recap, in Israel, you should not expect to make the same amount of money or celebrate the 4th of July as you would in America.

Holy crap, have you heard? Bank Leumi is running this special deal for its members: For every shekel you deposit, they will match it with 99 of its own, giving you a sum ONE HUNDRED TIMES your initial amount. How else to explain this transaction report? 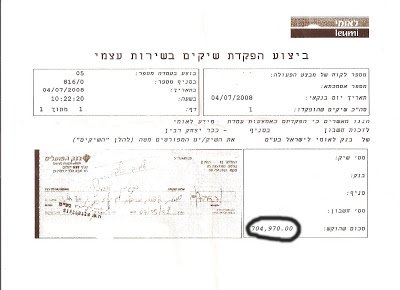 All I did was try to deposit a check for 7,049.70. LOOK HOW MUCH WAS CREDITED TO MY ACCOUNT!!!!! HOLY FALAFEL BALLS, BATMAN! It’s not like I’m an oleh chadash who’s incapable of reading the 470 Hebrew messages that you’re prompted with when you try to do anything through the ATM. Some would question “hey, why don’t the Bank Leumi ATMs have a ‘Please confirm this amount’ button?” Some don’t live in Israel.

With my newly found money, I plan to do the following:

It’s all about the Ben-Gurions, baby. Who wants to party?
2:54 PM Here’s a note for you prospective bloggers out there: when you post a copy of your deposit report, be sure to Photoshop out *all* occurrences of your account info. Even get an Israeli’s help if necessary. Thanks, Yehoshua.