An Idiot’s Guide to the Tel Aviv Beach

Posted at 1:00am on Jul 7, 2008 in Comedy, I Love This Place, Israelis Make Me Laugh, The War Zone, This Aliyah Moment is Brought to You by the Letter Aleph by Benji 0 Comments

Shalom from Tel Aviv, my loyal readers-are you enjoying the gorgeous weather? I sure am. With the ol’ day job continuing at a fever pitch, I’ve adapted a new strategy for the weekends. I like to call it “sit on the beach and do nothing.” I highly recommend it. And apparently many have taken this recommendation to heart as evidenced by the large number of locals and tourists flocking to Chof (Beach) Bograshov on Fridays and Saturdays. And why not? If you hadn’t heard, Tel Aviv is approximately halfway between Jerusalem and the sun. With temperatures hot and getting hotter, what better place to spend your time than the beach?

Unless you want your appearance to scream “TOURIST!!!”, you’ll want to take the appropriate measures to fit in. Without further ado, here’s a quick idiot’s guide to what you need to know about the Tel Aviv beach.

Attire
What to wear? “If you’ve got it, flaunt it.” Some Israeli men have apparently translated this to “If you don’t have a bathing suit, hey no problem!” While you don’t have to worry about shark attacks, there is nothing more frightening than seeing a Middle Eastern man flaunting his skimpy briefs. Thanks to those who have burned the image into my brain for all eternity. For the women, the rule is generally to wear whatever is fashionable, especially if you are over the age of 55 and enjoy wearing a bikini three sizes too small for your body. Kids four and under: clothing optional. 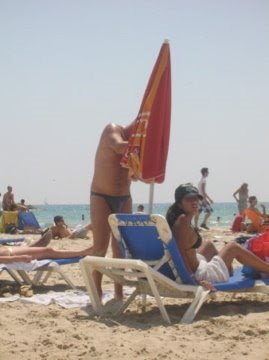 Two things escape me right now: words and my lunch.

Keeping Yourself Entertained
If you’re the athletic type, you may enjoy matkot. Matkot, according to Wikipedia, “or beach paddleball, is a popular traditionally non-competitive game in Israel, sometimes called Israel’s unofficial national sport.” It is played with two players who attempt to hit the ball back and forth as many times as humanly possible, creating a high-risk environment where beachgoers can enjoy the possibility of being hit in the head by a ball flying at Mach-2.

The object of the game is somewhat unclear. While matkot advocates claim that it is a leisure sport like frisbee, involuntary spectators have found more accurate comparisons to games such as Chinese water torture and banging your skull against the wall. I like to refer to it by its alternative title: “Really Annoying Game.” 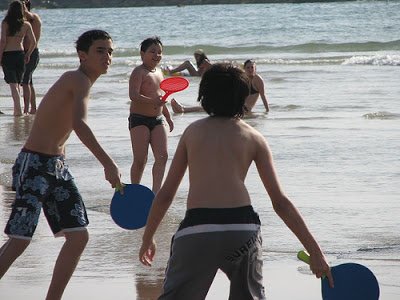 The Israeli beach: More proof that Israel is a war zone.

Jump In!
Ready to hit the waves? Let’s do it! Just be careful to avoid the jellyfish, known to locals as “medusa”. The medusot arrive just in time for summer and like to sting unsuspecting swimmers. Not only do they sting something awful, but their secretions float in the water and sting if they come in contact with you. (Ok, I just made myself throw up.) Here’s the kicker: the legend goes that the best remedy for a jellyfish sting is to, ahem, urinate on the affected area. Not only am I perplexed as to who thought to test this theory out, I am convinced this began as a hazing ritual in the IDF.

Goldberg ha’chayal: “Ehhhh….m’faked! I hev been stung by medusa! Waht to do?”

Getting Hungry?
Assuming you escape the Mediterranean unscathed, you’re probably finding yourself ready to relax and replenish your body with something delicious. Not to worry-the beach is full of men peddling treats to hit that sweet spot with a variety of “artik” (ice cream) or “kartiv” (popsicle) treats. The marketing plan of the typical beach peddler seems to be to loudly scream the as word “artik” as many times as humanly possible. (Upon further investigation, this reporter recently discovered that this guy in fact knows no other words.) Nevertheless, the artik guy certainly earns his shekels, covering the beach with quickness, his eagerness to sell matched only by his desire to wear flowery shirts unbuttoned down to his stomach. 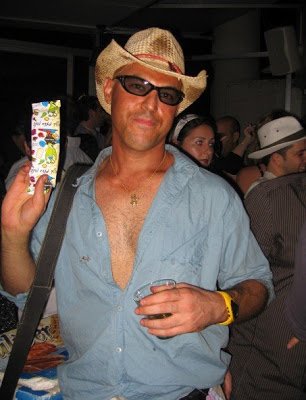 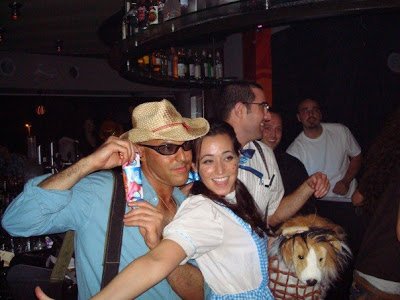 Halloween or not, who doesn’t love the artik guy?

If you’re looking for something more substantial, the beach cafes are great too. You should however be aware that they function using their own currency system. While I’m not an economist, I believe that the exchange rate involves taking the price in shekels and multiplying by a factor of 25 million. Pass the schnitzel strips!

Safety First
Of course, you should also be sure to wait after eating before returning to the water. Safety is a primary concern at any body of water and the Tel Aviv beaches are equipped with lifeguards, metzilim, ready to save the day. These Israeli lifeguards sit in tall huts on the sand, yelling things into megaphones which no one in particular seems to heed.

For some reason, however, when the words come out of the speaker, they sound more like: “Eeg-nohr waht I em saying! Thenk you!”

Ignore the lifeguards at your own risk. What’s the risk? It’s not drowning, people, it’s incurring the guilt of lifeguards who apparently earned certification in both water safety and being an ima Polania (“Polish mother”, or “Jewish” in the rest of the world).

“If you drown, you’ll have only yourself to blame!” Chicken soup, anyone?

While there’s just so much to do at the beach, the best activity is…nothing. Israelis have an incredible ability to relax, appreciate life, and to enjoy moments to their fullest. From the beaches in Thailand to the sands of India, you can find Israelis in every area of the world, traveling and enjoying their leisure time. As for those of you with plans to travel to Israel, I’ll see you at the beach. 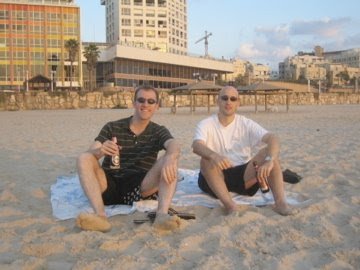 An unidentified blogger enjoying life.
What are you waiting for, Americans? Surf’s up!

An Idiot’s Guide to Israel Weddings

For more good times, sign up for updates on the right. Ya’ala!