Remember the scene in “Wayne’s World” where Wayne and Garth are playing with the blue screen in the TV studio, pretending to be in different places? After a long pause during which they realize they’re only “in Delaware”, Wayne says matter-of-factly “Hi. I’m in Delaware”? That’s a little how I feel about starting this holiday wrap-up about this somewhat uneventful chag.

Yes, this chag doesn’t bring the fun of Purim or Hanukkah or the all-encompassing atmosphere of Yom Kippur but it’s still a holiday and it’s still a day off from work in this country, darnit! Therefore, we in the War Zone are morally obligated to cover it. Let’s begin.

Shavuot is the holiday where we commemorate G-d giving us the Torah at Mt. Sinai by eating cheesecake. Oh yeah, that makes a ton of sense. Who started this brilliant custom? As I first mentioned last year, in a study which I won’t bother linking to, a high incidence of lactose intolerance was discovered among North American Jews, similar to findings in Jewish communities in Israel. Remind me not to get into a car with anyone until this holiday is over. 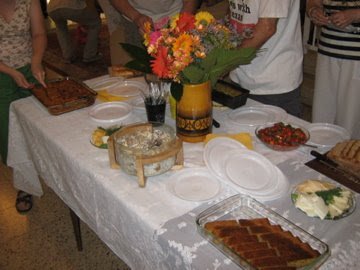 Quiches, cheeses, and other goodies.
Feel free to insert your own toilet humor references here.

Last night, I went to my friend Noga’s family for dinner. We stuffed ourselves with what seemed to be a dairy cucumber soup, different dairy quiches, cheesecake, and more. While talking to Noga, the topic of Obama and the presidential race arose. Breaking news: 3 people on the planet understand the primaries and electoral college. The conversation begins with her delivering the line of the night: “So waht deh hell eez going ohn right now?!?” I laughed hard before proceeding to eat a dairy farm. Ech omrim “food coma?”

Some of my friends stayed up late into the night learning. As I told my co-workers last week, “I plan to be awake at 4 AM to study Torah. And when I say ‘studying Torah’, what I really mean is CELTICS-LAKERS, BABY! GAME TWO!” In the end, neither happened.

This morning, more food courtesy of loyal reader and old friend from Texas, Martin. For the last time, yes, there are Jews in Texas and believe it or not, just about none of them have accents or any other distinguishing features that differentiate them from other American Jews. Well, almost no distinguishing features. 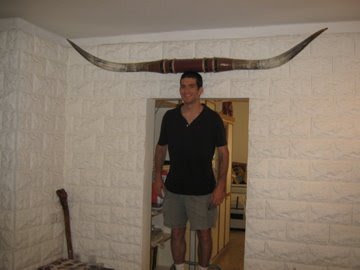 In case there’s any lingering doubt about Jews and horns, this should clear it up.
Five minutes after taking this picture, we milked this thing and made some cheese blintzes.

Tonight, a lovely picnic (there’s that word again) in Park Hayarkon thanks to the social organizing of my friend Jodie. I feel like I’ve been to the park more times in the last 3 months than in the previous year and a half. Not bad, the park! We didn’t arrive till almost 6 PM which was a good thing considering Tel Aviv was 800 Kelvin today. JESUS H., where did that come from??? I could fill a kumkum with sweat. (So much for guests ever coming over for tea.) Looks like it’s beach season…prepare for some great updates.

Lastly, on nothing related to anything except time passing and serious reflection….at the time of my writing this, fifteen years ago today I returned home to the States after spending the year in Israel. To any of my Year Course friends who might be reading….all the best to you wherever you are.

Now I’m off to bed…right after I squeegee the sweat out of my room. Chag sameach, everyone!