Posted at 2:30pm on Jun 6, 2008 in Israelis Make Me Laugh, Miscellaneous, Once in a While I Just Have to Vent by Benji 0 Comments

Hello, my loyal readers-enjoying the lovely weather? I just got off a phone call with a friend Rachel who described the day as lovely. Are women halachically required to describe everything as “lovely” once they hit their upper 20s? I recently noticed a few of my lady friends using this word every time we speak. There’s a word I don’t think I’ve ever heard my guy friends say (along with “handsome” and I don’t know what else.) How lovely.

Here’s something that’s not lovely: spending 48 hours in Ichilov Hospital in Tel Aviv which I had the fun of doing recently. Wikipedia describes Ichilov as the main hospital serving greater Tel Aviv and where Prime Minister Yitzchak Rabin died on the operating table. I hope they don’t advertise that on their website. Ok, I’m on their English site now and what do I see at the bottom?

Sponsored by Coca Cola??? What the hell??? When a hospital needs product placement to raise funds, I get a little nervous about letting them cut my insides open.

Anyway, if you haven’t heard from me or been reading, let’s just say my new job has been keeping me busy. My first birthright group was to arrive on May 20th with a 5 day work seminar to begin the following day. So when I had to put a sweatshirt on the evening of the 19th because my body was shivering, I’ll let you guess which of the following thoughts crossed my mind:

1) I’m going to take a long walk through Gaza City tonight.
2) MMMMMMM, I LOOOOOOOVE BISSLI!!!
3) I’m going to name my first-born Rifka Shnitzelface, but only if it’s a boy.
4) I can’t believe I’m getting sick NOW.

When I woke up throughout the night unable to swallow, I got nervous. Although I’ve never been the type to go to the doctor when sick, I’ve gotten the feeling when living here that I’m the exception and that most people go often. Is it because many companies require a doctor’s note to be excused from work? (Or is it because all the doctors are Jewish doctors?) Whatever-I knew that I could NOT get sick with so much going on. After an hour, I decided to go to Ichilov, a five minute drive from my house, figuring they’d give me some medicine and let me go in a couple of hours.

It’s a good thing I’m not a doctor. Try a couple of days.

With no pen, much less change of clothes, I didn’t get to jot much down for the first day or so. I had to commit the ridiculousness to memory. So here’s some of what I remember.

Ok, my best guess is that this guy is a refugee from the Sudan. I offer him my yogurt which I decide not to eat. A couple of minutes later, I hear a noise and turn my head. It’s my yogurt which the dude has decided to throw, either at me or near me. Aren’t these people in need of food? You don’t see arsim throwing hair gel at each other, do you? 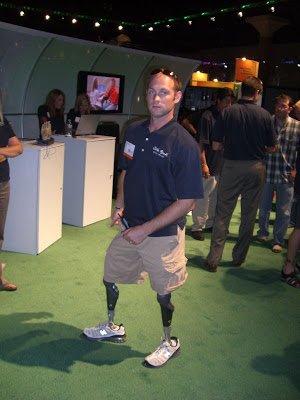 The price of cheap health care. 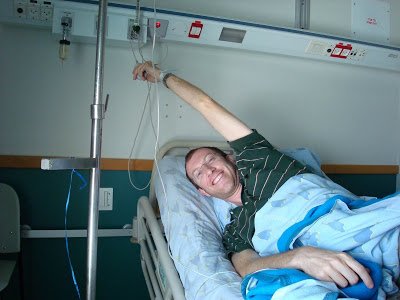 Ahhh…the bell.
Does this look like someone who’s suffering? 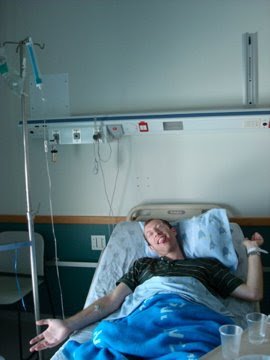 Did my life just flash before my eyes?
Nope, just horrible TV that I spent 35 shekels to watch.


Fortunately, they let me go two days after admitting me. Usually I’m joking when I talk about the 60 year-old grandmother cutting me off in line but picking up my pills at SuperPharm, it really happened. And she even had the classic Israeli old lady RED hair. (Boy, if that isn’t a future post…) She said “Hayiti acharav, b’seder?” (I was after him, ok?) I was so in shock and tired that I couldn’t even muster up the energy to respond, instead just nodding my head.

That’s what a couple of days in Ichilov will do to you, I guess. Now that I’m 100%, I realize that only when you’re sick do you truly appreciate the good things in life. Time to start taking advantage.

Anybody want to go to the beach this weekend? I hear it’s supposed to be lovely.