Good Thing I Use Bank Leumi

Just a week or so ago, I wrote about the Israeli flags this country was importing from China. Hmm, how did that turn out?

Here is the Chinese-made flag currently hanging in my room which came included in the newspaper before Yom Ha’atzmaut, thanks to the generosity of Bank Hapoalim. 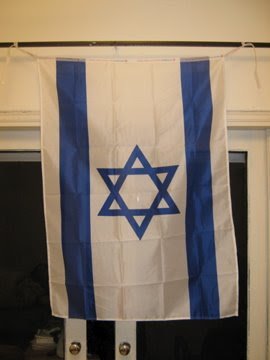 See anything wrong here? Oh, gee, how about that the STAR IS AT THE WRONG ANGLE?!?!

Yeah, fine, so when it’s hung vertically, it looks like the one hung in Independence Hall from when Ben-Gurion declared out independence. Sorry, not buying it. Somebody fadicha‘ed this one up. (For my non-Hebrew speaking readers (or is it Arabic?), a fadicha is a…umm…ok, I don’t know how to explain it without using another F-word. Let’s just call it a big mistake, ok? So is there a verb for fadicha? Cause Bank Hapoalim fadicha‘ed this one.)

Does this symbolize a pattern of behavior? Has some poor oleh accidentally had his paycheck withdrawn from his bank account instead of added and hasn’t noticed? I don’t know about the rest of you olim, I read my bank statement and Hebrew mail with the regularity of a lunar eclipse. 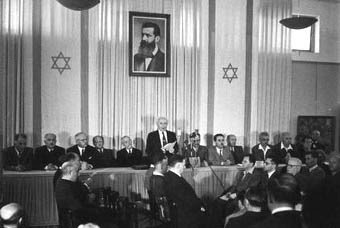 “I wud like to deh-cler two theengs:
1) the een-deh-pehn-dehnce of Eez-rayl
2) who fahked up deh flegs?”
Lastly, on an unrelated note, my roommate just looked up from her newspaper and said in Hebrew (I’m translating), “Do you know that the milk from girafot (jee-raf-ot) is kosher?”