Crossroads Comedy: Because What’s Not Funny About Troubled Youth?

Once again, my buddy Avi Liberman‘s back in town with his friends, putting on great stand-up shows for a good cause starting this week. The proceeds to to the Crossroads Center for troubled teens in Jerusalem, run by Caryn Green, also an old friend (Ech omrim “name dropping? It would be weird if I didn’t mention them. At that’s what Justin Timberlake and Tzipi Livni told me.) 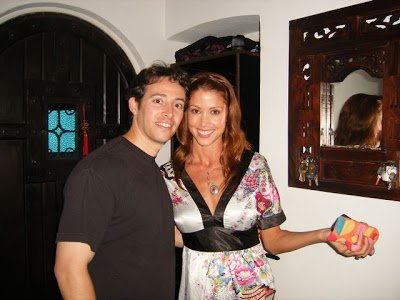 Avi and Shannon Elizabeth of “American Pie” fame.
Nice one!

The lineup this summer is:

Harland Williams, scene-stealer from “There’s Something About Mary”, “Dumb and Dumber”, and more

And Avi will throw me into the Yarkon if I don’t mention all his great credits, from “Last Comic Standing” to The Craig Ferguson Show, “Dave’s World”, “Boston Common”, a national Starbucks commerical, and more.

I saw Harland Williams about 10 years ago in Texas and was in pain from the laughter. Dan Naturman I saw a few times in NY-hilarious. I haven’t seen Lowell Sanders live but I’m sure he rocks. And of course Avi’s great.

The shows sold out last time so buy tickets now; all the info’s right here. If you like to laugh, you should NOT miss out.