What, You Thought We’d Turn 60 and Then Go Back to Our Normal Lives?

Posted at 11:48am on May 5, 2008 in Benji's Getting Serious, I Love Hebrew, I Love This Place, Israelis Make Me Laugh, Jew Stuff, Now I'm Just Being Silly, Tuesday Israeli Hottie by Benji Lovitt 0 Comments

Cross-posted at 60 Bloggers, a site hosting 60 posts in 60 days to celebrate…what else? The New Kids on the Block reunion tour!

Much of this will be familiar to my loyal readers, some of it not. Enjoy and Shabbat Shalom.

Sixty things I love about Israel:

1. I love that the women are not only hotter than Mitzpe Ramon in July but that they also have a Passover Seder. (Much like the fourth dimension, my human brain is incapable of processing this.)
2. I love the outdoor cafes/kiosks on Rothschild and that Israelis universally agree that Starbucks (the altar to which American consumers bow their heads and pray) stinks.
3. I love that I don’t look at the people I meet as French, Russians, or Australians, but rather as Israelis who are trying to make it here just like I am.
4. I love my Ulpan teacher from Kitah Bet, Dafna, who spoke to us like we were four so we’d understand her.
5. I love that falafel is a healthy snack (OK, maybe I just love choosing to believe the American myth while I scarf it down forty-seven times a week.)
6. I love that people I know from all over the place are always visiting this place, the center of the Jewish world.
7. I love that I can tell a joke about Rosh Hashana at a comedy club here and know that it will be understood by everyone in the audience.
8. I love wearing jeans to virtually any social event.
9. I love the kumkum and the utter shock on every Israeli’s face when they ask “but how do you make coffee in America???” in the same manner that teenagers ask how we survived before cell phones. (Since it takes an hour for my dud shemesh (water heater) to heat up during the winter, next December I plan to shower in the kumkum for the next 3 months.)
10. I love that it’s 12:48 AM, tomorrow is a work day, and Cafe Aroma is still hopping. HOW DO THESE ISRAELI PEOPLE DO IT???
11. I love expanding my already unrivaled vocabulary of ridiculous Hebrew and Arabic slang and that Israelis think I’m fluent because I can say I have to go the bathroom 47 different ways.
12. I love arsim (from afar. When they’re leaving me alone.)
13. I love Friday in Tel Aviv. 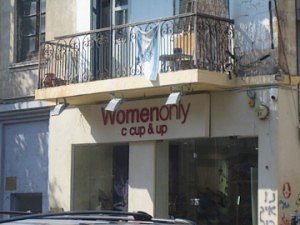 Ahh, Sheinkin St. on a Friday.
Marketing in the Middle East makes me laugh.

14. I love English words which are directly absorbed into the Hebrew language. “Slicha, yesh li peepee!”
15. I love how warm and proud of each new immigrant the former olim are and how so many treated me to an “aliyah beer” or dinner when I arrived.
16. I love how cheesy American pop music is welcomed with open arms here. For this reason, someone hypothetically can sit in the barber’s chair, get a proverbial spring in his step when “Backstreet’s Back” comes on, look around, and realize that nobody finds it the least bit weird that said song is being played. This is all hypothetical of course. It never happened.
17. I love that I went to World AIDS Day and had my AIDS awareness raised by two macho sperm kicking a soccer ball.
18. I love that people are so unbelievably hospitable to the degree that my American brain cannot understand. Like when 45,000 people invited me to their Passover Seder, including a co-worker who I had only known superficially for a few weeks.
19. I love Adloyada in Holon, the biggest Purim parade in the country which feels like the Macy’s Day Parade on Thanksgiving.
20. I love the feeling of unity and Jewish peoplehood on Yom Hazikaron when people stop whatever they’re doing to commemorate fallen soldiers during t’kasim (ceremonies) and during the siren. Even though it looks like aliens have invaded earth and frozen the human race.
21. I love the ridiculous English t-shirts that people wear in this country, usually with no inkling of what they even say or mean.
22. I love that Hebrew is both an ancient and brand new language with words whose roots can be traced as far as the Torah (b’reishit, whose shoresh is “rosh” or “head”/”beginning) and as recently as NOW (“l’sames”, “to send an SMS”).
23. I love the food here, how people eat such a healthy diet, such as my co-worker who ate a whole pepper in her hand as if it were an apple.
24. I love the almost meaningless phrase of “yiyeh b’seder” which I continuously mock for its universalness even as I say it myself to make myself feel better. 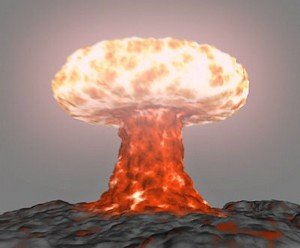 25. I love how someone would slow down during the running of a marathon to say “b’tayavon” to the bystander eating 100 meters away.
26. I love that when Maccabi Tel Aviv recently competed in the Euroleague international final in basketball, people stopped what they were doing to support their country and watch.
27. I love that stockbrokers and garbagemen can get together one month out of the year and shoot RPGs.
28. I love that I wear ties with roughly the same frequency that I take a bubble bath.
29. I love how any stranger at a bus stop can start talking to you about politics and philosophy… and then try to set you up with their niece.
30. I love that I have a full-blown fever, have to pack to leave my apartment for the next week, and that the little Israeli voice in my head is saying “yiyeh b’seder.” I know we already covered this. I have to keep reminding myself.
31. I love Easy Park and Pazomat, the ingenious car-related inventions that someone should bring to the States and get rich with.
32. I love shira b’tzibur, congregating with friends and strangers in a public venue and singing songs that you may have only heard at Jewish summer camp.
33. I love Galgalatz, the only radio station whose format somehow includes both Gidi Gov and Kanye West.
34. I love that Israeli models like Nivit Bash model for Maxim Magazine weeks before going home for Passover Seder.
35. I love that instead of singing about “Old McDonald” who had a farm, it’s Dod (Uncle) Moshe.
36. I love that that this country is truly a Kibbutz Galuyot (an ingathering of the exiles) and an Israeli-making factory. Marry a Brazilian immigrant with a Romanian, have them procreate, and their kid says “ehhhhhhhhh…….” and is indistinguishable from the Russian-Hungarian kid three feet away.
37. I love that somehow, someway, I’ve gotten so used to drying my clothes on a clothesline that I can hardly remember why it felt so necessary to have my socks dry in 45 minutes.
38. I love that everyone says “mazal tov” to each other at an Israeli wedding, regardless of whether you’re actually the one getting married or not. (What did I do? I ate 10 egg rolls in 5 minutes. I didn’t think anybody noticed.) 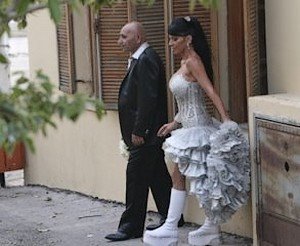 Is she getting married or walking on the moon?
“Houston, we have a freicha.”

39. I love the odd juxtaposition of daily activities like jogging with my ipod combined with the crazy history of my running path through sites like Kikar Rabin. It makes you realize that you live here.
40. I love that my friends Daniel and Amalia made me walk the long way home the other day so they could poach some exotic fruit called pitango from a secret place in Tel Aviv which I’m not allowed to disclose. WHO DOES THAT IN AMERICA???
41. I love that the holidays recognized by the majority are MY holidays and that we don’t have to stress about taking time off from work to enjoy them.
42. I love how Israelis would hike up a bubbling volcano and stop 10 feet from the molten lava just to whip out the portable burner and make Turkish coffee (while balancing on a shaking rock.)
43. I love how the six degrees of separation is reduced to ONE with seemingly every single person I meet here. And that it rarely even requires the use of Facebook to figure it out.
44. I love that Facebook has Israeli applications like IsraPoke. Would you like some chumus with that?
45. I love how the doctor turned into a Jewish mother before my eyes, grabbing the phone from my sick little hands and telling my friend that she needs to take care of me because I was “mamash, mamash, mamash choleh.”
46. I love how no matter how much I stress about having to accomplish on my weekend, somehow, when I spend Shabbat away from home in a relaxing environment like Jerusalem, in the end, it was “yiyeh b’seder.”
47. I love how when you walk into an Israeli’s home, approximately 1.34 seconds elapse before they offer you a hot drink. You could enter their apartment with a clown suit and a machete, the first thing they’d say? “Some-theeng to dreenk?”
48. I love seeing my Israeli friends in the days after Shabbat because they feed me. Not just with anything but with the 468 Tupperwares of delicious food that their mothers have sent them home with after the weekend. Where do these mothers find the time??? You leave them alone for 5 minutes on a Friday, when you come back, they’ve whipped up a 7 course meal for the Western Galilee.
49. I love that I saw “Borat” in Israel where everyone was dying laughing from all the hilarious Hebrew. You think that happened in the Cherry Hill, New Jersey multiplex? (Does Cherry Hill have a multiplex?)
50. I love learning some random phrase in Ulpan or in the shetach (”the field”) and then picking it up in conversation days later to my complete delight. This leads to awkward exchanges where I interrupt two people by suddenly screaming “COMMON DENOMINATOR! COMMON DENOMINATOR!”
51. I love how the sample credit card in advertisements doesn’t have a name like John Doe or Shmuel Ben-Tov but instead “Israel Israeli.”
52. I love how the band at the first soccer game I attended played not “We Will Rock You”, but “Heveinu Shalom Aleichem.” What is this, Rivka’s Bas-Misvah?
53. I love how my former roommate tried to teach me how to clean by taking the toilet brush, cleaning the toilet, and then using the same toilet brush to CLEAN THE SINK. And she thought I was the idiot. (Ok, just kidding. I didn’t really love that.)
54. I love when an Asian person stops me to ask where the #5 picks up and we converse in Hebrew.
55. I love how someone stood up and blew the shofar on an El Al flight last September. If that happened on an American airline, this would lead to confused passengers tackling him and the ADL issuing a press release. 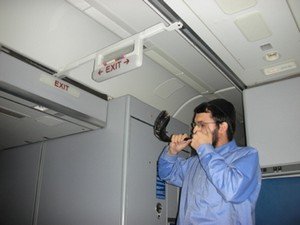 IS IT A CRAZED FUNDAMENTALIST?!?!?!
Nope, just Duvid welcoming in Tishrei.

56. I love that McDonalds is kosher for Passover.
57. I love that on Israeli Survivor, the contestants are often far less cutthroat than their American counterparts, schmoozing and laughing like….well, Israelis.
58. I love how on Yom Kippur, there are almost zero cars on the road.
59. I love that living here makes me feel like I am contributing to the building of a country.
60. I love that I’ve had this once-in-a-lifetime experience and that it’s not over yet.