Do They Sell ‘Belated Happy Birthday’ Cards in Hebrew?

Posted at 4:38pm on May 5, 2008 in Benji's Getting Serious, I Love This Place, Jew Stuff, That Thing That Pays the Bills, This Aliyah Moment is Brought to You by the Letter Aleph by Benji 0 Comments

Well, it’s the Friday night before the week my first group arrives from the States. Exciting times. I’m spending the weekend taking it easy and catching up on my life, doing all the things I either do in the next 24 hours or don’t do at all. That includes recapping Yom Hazikaron and Yom Ha’atzmaut. What, you thought a holiday would pass without a long and serious post? Fasten your seat belts, my loyal readers! (All four of you.)

Man, where to begin? Every chag, I lose my mind, falling in love with this country again. How many times can I say it? Every Jew should spend a year here, experiencing the full cycle of holidays. One night, I’m going to wake up in a cold sweat dreaming about Yom Ha’atzmaut in some small-town JCC where their idea of Israeli Independence Day is cold, nasty falafel and playing Hava Nagila on the sound system. Most of these communities do the best they can…but how can they possibly compete with the real thing? I wonder how my American brothers and sisters celebrated this year… 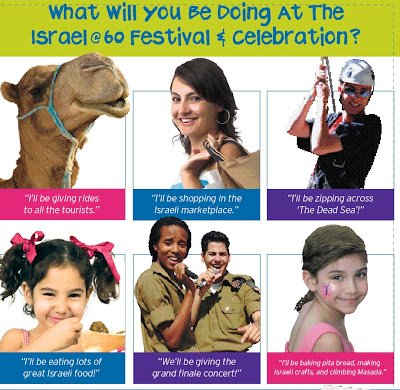 And seriously, the Israeli tour operators are as much to blame as anyone but can we decide once and for all if we’re promoting the camel angle or not?

Average pro-Israel marketing material: “If you think this is a land of camels and deserts, think again.

More from the JCC’s advertising…

Too bad I can’t blow that up more…it’s a beginner’s guide to Israeli slang. Can you read the words in the right column? “Alakefak…s’baba….achla!” Apparently every phrase to describe something good is translated as “Cool! Awesome! Terrific!” Israelis must think we’re the biggest dorks ever.

Yom Hazikaron has no words. I was actually really upset because I got stuck in Jerusalem after a long day at work instead of going to the massive, solemn song session FIVE SECONDS from my apartment in Kikar Rabin. In the end, I went to Har Herzl with some co-workers for a small tekes (ceremony) there led by a group of tsofim (Israeli scouts). (The big ceremony took place the following day.) What to say? Maybe, like last year, I was missing something, some level of understanding that the Israelis around me had from their time in the army or their loss of a loved one. But to witness a moment like this surrounded by people commemorating such an important thing together…it’s just so powerful. Much as I love America, I will never understand how we/they celebrate Memorial Day by doing anything but memorializing. “What? Soldiers died fighting for democracy? Let’s go shopping!” Say what you want about the political divide in Israel, it’s days like Yom Hazikaron when it feels like a COUNTRY. I only remember that feeling once in America and it was after 9/11. 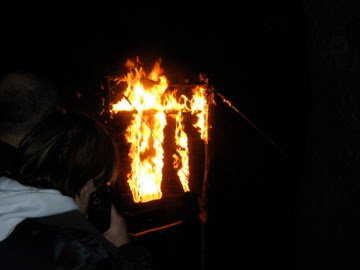 The next day, we had a tekes at work with readings and songs, and after a year and a half of listening to my ESPN sports podcasts and American music, I finally felt the urge to listen to Galgalatz. On Yom Hazikaron, the radio stations play nothing but classic sad and quiet songs, many of them about war and loss. You really feel the day. And then there’s the siren. There are tons of videos on Youtube, all of them powerful. If you still haven’t seen one, you can take a looksee here. (By the way, about 2 months ago, for the first time ever, I saw the word “looksee” written. Did you guys know it’s ‘look-see’? I had no idea. Ech omrim “looksee”?)

This is where I was going to post the very first result that Google Images
gave me for “looksee”, just for fun. I just saw it-no way in hell.
Curious minds can check it out for themselves.

Back to the night before…after expecting for months to go to the kikar for erev chag, I watched the hands on the clock in the office move till the point of realization that I was going to miss it. Being only a week and a half into this job and already drowning, I was so overwhelmed that I had actually decided to stay and skip the t’kasim altogether. A few of my co-workers then invited me to join them and I knew if I said no, they would talk me into going with them. Thank G-d they asked. By the time it had ended, it was probably 9 PM and we were all on our way back to the office to keep working. Unfortunately, I hadn’t had a chance to eat dinner.

Let’s backtrack: A few hours earlier, these same co-workers ordered in Chinese food to prepare for the late night of work. As I sat nearby quietly hungry, a couple of them offered me to join them. When I asked them later how much money I could contribute, they seemed surprised I would even ask. Fast forward a few hours: With everything in the city closed because of the holiday, I knew my food prospects were slim. When I asked the woman driving to stop at a gas station so I could pick something up, she reached for her cell phone. Before I knew what was happening, the co-worker on the other end of the line was making a pit stop at her refrigerator on her way into the office, bringing me 2 tupperwares of food from her home. I was stunned. That kind of hospitality just wouldn’t…it just didn’t ever happen in the States. I don’t know how many late nights I had in New York. I just don’t think it would occur to anyone to worry about others in the same way and those were the most wonderful group of people anywhere. You just have to be here to understand it. And I STILL DON’T UNDERSTAND IT!!! WHAT IS WITH THESE PEOPLE THAT THEY ARE SO DAMN WARM??? I have spent so much of the last 2 years frustrated and struggling with life but this 24 hour period was just so touching, it reminded me of why I moved here in the first place. During the tekes on Har Herzl, I scribbled down some notes to myself to start appreciating life here and to remember that this country is unbelievably magical. For the next few days, I ranted and raved to a few of my co-workers, asking them, “What is WITH you people?!?! Do you realize that other people ARE NOT LIKE THIS???” Usually they’d either look at me like I got off a spaceship or they’d respond with “we really need more Americans working here.”

Yom Ha’atzmaut: what can be said? How about just a few words… 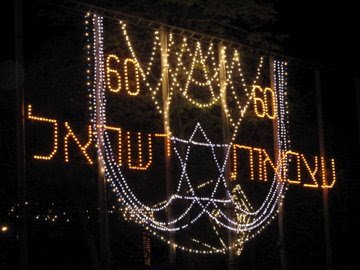 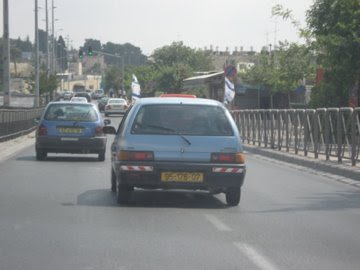 Crowded block party in Florentin
Barbeque, sun, and barbeque in Park Hayarkon (did I mention barbeque?)
Everyone in a great mood

I captured a lot of the celebration in Kikar Rabin on Erev Yom Ha’atzmaut. That I was NOT going to miss. The quality ain’t great but it’s worth watching for the fireworks, songs, video “slideshow”, and the fun times on the bus. Thanks to Amalia, my right-hand man, and Naomi for the camera work on that.

In an unrelated note, Naomi wins the prize for “phrase that has probably never been said at any other time in recorded history.” While waiting for the #18 bus to Florentin, she whips around holding a bottle of beer and says, “Omig-d, I have to tell you something about chumus that you wouldn’t believe!” Frankly, I don’t remember what came next but does it even matter?

Young girls with silly string, singing in Kikar Rabin, fireworks and an unexpected shout-out to Camp Ramah (that made me laugh.)

More fireworks, a look back at Israeli history, and a fun bus ride to Florentin…

And that just about sums it up. What a country. Happy 60th, Israel.