We’ve aaaaaaaaall seen it. The menus with the typos. The weird-ass t-shirts. For the love of G-d, I think there’s a typo in my company’s freaking NAME! (As explained in the link, I’m not going to write it out here but shouldn’t there be an ‘s in it?)

Fine, we’re not in America. I get it. But if you were going to open a restaurant in China…wouldn’t you want to have a Chinese person proofread your menu first???

Benji If I Were A Bad Businessman: “Hey, Mr. Wu! Today’s opening day! I can’t wait to serve our first sweet and sour chicken!”
Mr. Wu: “I mahst tell you, Meester. Lahv-eett! You use way too menny

‘s in the menu! You weel offend our pee-pehl!“

If any Israelis are considering doing anything in English and would like proofreading and editing for reasonable prices, please contact me. And by “reasonable”, I mean “it might be free unless I decide otherwise.”

Anyway….check out this recent advertisement sent to me by the very funny Esther Kustanowitz who has articles and writing in more places than I can link to. 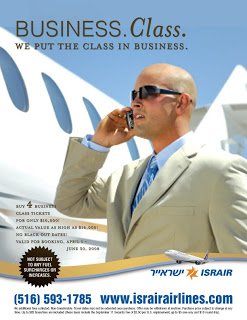 Hey, Israir, here’s a slogan for you. “We put the D+ in Marketing.”

Now…I’ve never flown them and will assume they’re a nice airline. I don’t want to sound like a jerk but I’m not a huge fan of the name. “Israir”. It’s pronounced “Isra-air.” Shouldn’t there be another “A”? Was Israel Air taken? I just think the name “Isra-air” is kind of stupi-id. But I wish them the be-est, really I do.