Well, It Was Fun While It Lasted…Get Ready, I’m About to Get Serious Again

Posted at 9:30am on Apr 4, 2008 in Benji's Getting Serious, I Love This Place, That Thing That Pays the Bills, This Aliyah Moment is Brought to You by the Letter Aleph by Benji 0 Comments

Any of my long-time readers notice the serious amount of posts over the last month? Let’s just say that I’ve had a fair amount of time on my hands. April officially became my most prolific month of writing last week and with a few more good days, the previous record of 21 posts in December was going to be left behind like a piece of half-eaten shnitzel at closing time. (I don’t know what it means either, I’m riffing, baby!)

Much as it pains me to make fun of this wonderful country less than the current pace (especially after hitting ‘refresh’ on my statcounter every 3.4 seconds since March), be prepared, it’s about to happen. For a good cause.

Anyone who knows me knows that my connection to this country comes from many years of involvement in Young Judaea, both as a kid and as a professional. (Ech omrim “product placement”? I should really get paid for these plugs. “I sure do love blogging! And when I’m done, nothing hits the spot like a big-ass bag of bissli grill! Those salty corkscrewed critters go crunch! and remind me what it means to be Israeli. So head on down to your local makolet today and remember who sentcha!” cha-CHING! 10 shekels) 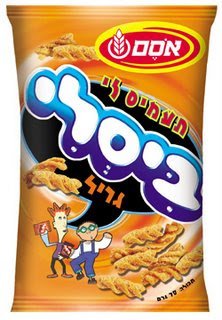 This just paid for my arnona.

In the past few months, I’ve done a few different jobs to “pay the bills” as we say while watching some other really amazing things materialize in my spare time (like the recent Ynet article for example, if you didn’t already receive it from me on email, Facebook, Twitter, Friendster, MySpace, postal mail, carrier pigeon, Morse code…)

However, all the exciting stuff hasn’t changed the fact that something’s not right in my life. Life ain’t easy as an oleh chadash and anyone who’s ever done it knows what I’m talking about. I’m not going to go into detail but there are ups and downs. One of my personal stumbling blocks to my complete surprise has turned out to be Hebrew. A year and a half ago, I was flying, learning left and right and actually noticing improvement on a daily basis. Yeah, that changed. For a number of reasons, I think my Hebrew has stayed the same and truthfully even gotten worse since this time last year. Any desire I had to make flash cards, translate hip-hop songs into Hebrew (I was singing the chorus of “Ice Ice Baby” to my friend Ziv back in high school), and call my friends fun and inappropriate words has sadly dwindled into nothing. Not being able to communicate is one of the most frustrating feelings I experience and drives me batty. Making a decent salary and making people laugh at arsim just isn’t enough…something’s missing.

Drastic times call for drastic measures. I simply am unable to work for the man, just as I wasn’t able to back in the day before I made the big switch to the Jewish world. Good bye, decent pay and short commute. Hello, new job! Tomorrow I begin my working for Israel Experience, the tour operator within the Jewish Agency for Israel. I’ll be doing the exact opposite of what I did in New York for Young Judaea: convincing families not to come to Israel for the experience of a lifetime.

(Did anyone believe that? If so, please stop reading.)

Instead of marketing youth programs, I’ll be handling the other side of the coin, actually building the programs from this side of the ocean. One of my biggest clients will be birthright israel and I’ll be picking hostels, tour guides, hikes, speakers, etc. and making sure the group’s needs are being met when they’re here. It should be incredibly rewarding and fulfilling and I’ll eventually be reporting to someone I’ve worked with before, the former director of YJ’s national summer camp in New York, Camp Tel Yehudah. (Isn’t “camp” a weird first name? His parents were hippies. Ok, did anyone believe that? I am losing new readers by the paragraph.)

The work will be great, the environment will be a HEBREW-speaking one, and I think I’m going to love it. As for the daily posts? Well, it was fun while it lasted.

At least I left my last job laughing. I’m sorry, there’s nothing funnier than an Israeli singing “Spi-dehr-peeg? Spi-dehr-peeg!” in a heavy Middle Eastern accent. I really need a hidden camera.