This is Why I Created the ‘Benji’s Getting Serious’ Category

Posted at 1:59am on Apr 4, 2008 in Benji's Getting Serious, Comedy, I Love Hebrew, I Love This Place, This Aliyah Moment is Brought to You by the Letter Aleph by Benji 0 Comments

We interrupt this program for me to break character for a minute. When I started this blog, it was the classic traveler’s journal for family and friends about my life, expectations, experiences, etc. It didn’t take long for me to find my voice and start making fun of everything here (because if you don’t as an immigrant, you might go insane). Rare is the occasion that I share too much about myself, thoughts, feelings, etc. This would be the good time to make the requisite April Fool’s joke about deciding to stop writing this blog out of some ideological reason but I’m a day late and lo ba li (I don’t feel like it).

I just wanted to share the feeling last night I had of being really PUMPED UP. B’kitzur, my friends know I first did stand-up comedy over 10 years ago, on and off for the next several years, more off than on, with years completely off at times. Finally, after numerous efforts over the years to dedicate myself (which truthfully never even got off the ground nor became more than meaningless declarations), I decided before last summer that it was time, and this time I meant it. A series of experiences were enough to “flip the switch” inside me, so to speak. Since September, I have been on a mission, performing at open mic nights in Tel Aviv and Jerusalem, paid gigs here and there, private shows for groups, even dragging my butt literally out of bed on Erev Rosh Hashana to the open mic down the street which began past 12:30 AM if memory serves because the voice in my head was yelling at me again and I couldn’t stand to hear it any longer (I was literally lying in bed going to sleep, I didn’t literally drag my butt…is that possible?) It only took a couple of months for me to discern real significant improvement and it’s continued since then with great feedback throughout.

Many Tuesday nights I go to the open mic night at the Camel Comedy Club in Tel Aviv, one of the few comedy clubs in Israel (and I’m talking less than five…another example of how America is the land of everything and lots of it. And by the way, can we do something about that name? This country’s diplomats and shlichim are paid to teach the world that we have thriving cities, cutting-edge technology, and beautiful culture…can we stop giving the American teenagers camel rides when they come here?) 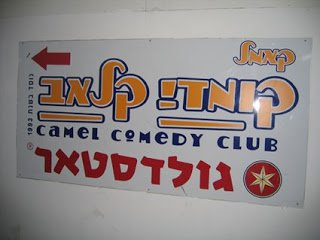 I hate riding my camel in Tel Aviv. Impossible to find parking.

Except for a couple of times, I have been the only American there and I spend my five minutes performing in English for an Israeli crowd who may or may not understand what the heck I’m talking about although to my surprise, the mostly teenage crowd does get most of it (I do however have to change some words here and there and throw in a gratuitous F-word which makes them laugh. “Ha, hu amar ‘fahk’! Ha ha!” People often ask me if I perform in Hebrew and while the answer is no, I have realized that not doing so keeps certain doors closed which I haven’t spent much time worrying about. (There are plenty of opportunities to perform here for English-speakers and plain and simple, my Hebrew ain’t even CLOSE to being good enough…and did I mention that life is busy as an oleh chadash? I have about 485 more important things to worry about like when I’m going to get my Israeli drivers license, buying furniture, and whatever else is always on my to do list. Switching over to Hebrew? One day…)

What am I saying? That although I usually do well at the Camel, there are never any guarantees when I am NOT SPEAKING THE NATIVE LANGUAGE OF THE PAYING AUDIENCE. (Yes, I have spent some time thinking about the complete insanity of this.) I have always believed that as long as I perform in English with the inherent risk that some or a significant percentage of the audience on any given night just won’t get it, I would not be asked by the management to move up and perform another night of the week in a higher-level show. And despite regularly getting one of the better receptions on Tuesday nights, no one has talked to me about moving up.

Until last night. As I was on my way out the door, one of the guys working who I’d not met before called me into his office. I probably didn’t catch every word and don’t even remember what he did say aside from the words “mitkadem” (advance) and “Yom Revi’i” (Wednesday). In this area of my life, I’ve taken most things in stride over the past few months. I am happy to admit that this to me was a beeg deel and it was hard for me to control my excitement as he was talking to me. I took the guy’s number, told him I’d call him, and expect to be on stage there next Wednesday. Five minutes later, I was outside breaking the news to my friends Etan and Amos and an Israeli comic Eyal. After my explaining that this was “a real show!”, Eyal brought me down to earth by saying “well, it’s not exactly a real show”. Ha ha…G-d forbid anything is better than just b’seder in this country. Ok, you know what? I don’t know what it is. I don’t know if the crowd is bigger, it’s not a paying gig, I probably get a few more minutes, I know before hand that I’m going on because it’s a set lineup and not an open mic, and that’s what I know, not to mention that they should be asking me to move up because of the reception I’ve gotten. But I don’t care. I moved to another country, am doing stand-up comedy, and am making people laugh IN ANOTHER BLEEPING LANGUAGE. In a place where olim chadashim often spend their time feeling like idiots, freirs, inadequate, and occasionally wanting to pull their hair out of their head, this is an victory. (Nefesh B’Nefesh is going to put a hit on me if I keep scaring away Diaspora Jews. If I disappear, you know who did it.) I may look back in two weeks and say “what was I talking about?” This is no different from what I was doing before and almost certainly my goals will continue to change, making Thursday nights the beeg deal.

But for now, even for a short time, I’m appreciating this and tooting my own horn. Because wanting something, working hard for it, and getting it is what life’s all about. Or something like that. And the day I perform just five minutes in broken Hebrew and get even one laugh? I won’t even know how to describe that.

Update: I just talked to my friend Tal who also performs on Wednesdays. Remember SAT analogies? Tuesday is to Wednesday…as Wednesday is to Thursday. It’s basically the next level, no big surprise. You do that for who knows how long and if you’re good enough, they move you to the next night, a more professional show. Tal confirmed that of course you get more time on Wednesday (8 minutes maybe?) and the quality of performers is higher although the crowds recently have not been as big as Tuesdays. And perhaps the best thing is that it’s more stage time. I can still go on Tuesdays to practice and work stuff out and then treat Wednesday like more of a performance. And everyone in stand-up knows that the #1, #2, and #3 most important things in stand-up is to find a way to get onstage.