‘Eets a Small World Eeeeeeh…..fter All’

Posted at 3:58pm on Apr 4, 2008 in I Love This Place, Israelis Make Me Laugh, That Thing That Pays the Bills by Benji 0 Comments

Holy hafuch, Batman….I don’t know how long I can keep up these 11:30 PM posts…at least not after I get home from work at 9:30 PM. With 24 minutes left in Israel, I need to put this April posting record out of reach. I feel like Barry Bonds in 2001 (minus the steroids).

Here are only the most recent example of how small my world is. In less than 24 hours:
1) The guy I’m replacing hands me the phone the other day. It’s Amy, a woman who currently works for Young Judaea who came aboard after I left (we met last year). Turns out that this guy helped arrange for her to do Year Course program promotions to his teen groups. I’ll now be arranging this.

2) Hitching a ride with my friend Shara from Tel Aviv on road 443, I call my department director Meir to let him know I’m running late. He asks where I am. I tell him. He says “get out of the car, I’ll pick you up.” About 2 minutes later, I’m in his car.

3) Fast forward half an hour-I make my way to the mini-kitchen (because G-d forbid anyone starts their morning in this country without first injecting a cannister of Maxwell House into their veins. I know we don’t have a Constitution in Israel but if we did, wouldn’t it protect the right to drink coffee from 9-10 AM?) Who’s making coffee? My dear friend Emil, former co-worker from YJ, who stopped by to do whatever shlichim do at the Chavaya Yisraelit (I think they just come by to learn new Hebrew slang that they’ve missed out on and drink coffee.)

How come every time I drink coffee,
I feel like I’m watching a commercial from 1987?

4) Replaced dude hands me the phone again to speak with someone else who he works with. It’s my adopted kibbutz mother from 15 years ago, Leah. Seems that I’ll be doing something with her too. When she stopped by the office today, she brought me a box of dates. Why are people so nice in this country? SERIOUSLY???

5 and 6) New co-worker who drove me in today dated a girl I met in the job I just quit….guy who drive me home has a cousin who just started at the place I just quit.

I haven’t collected any empirical data yet but I have a theory that there are actually only seven Jews in the world. I’ll get back to you on that.

28 posts this month with 2 minutes to spare. 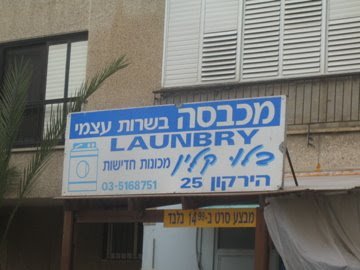