How else to explain this story?

A 27-year-old man, claiming to be a yeshiva student, decided to launch an unusual protest against a court ruling allowing stores and restaurants to sell leavened food during the holiday of Passover. The man, dressed as a haredi, arrived Monday afternoon at a store belonging to the non-kosher Tiv Taam supermarket chain in the city of Bat Yam, just south of Tel Aviv. Upon his arrival, he undressed and remained with only a sock covering his private parts.

I assume they mean he was dressed as a haredi before dropping trou, right? The next time I see tube socks in Mea Shearim will be the first. (Ech omrim “dropping trou”?)


The man explained that he could not be prosecuted for an indecent act in
public, because according to the court’s interpretation of the leavened food law, a supermarket is not considered a public place. He even wrote on his stomach, “This isn’t public???”

Well, it is now, buddy. Thanks for sharing. Does Tiv Ta’am sell vomit bags?

From my friend Mort: I wonder if it was a white tube sock, or if it was one of those fancy cris-crossed argyles that the haredim usually wear. Too bad there weren’t any pictures.

No, I take that back. Thank G-d there weren’t any pictures. 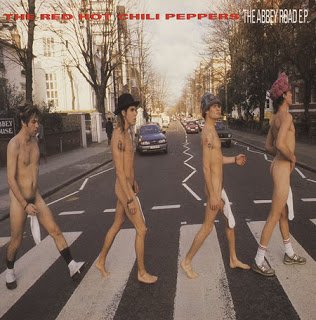 When my parents checked me into my dorm room the first day of college, there were already beer cans all over the table and this poster up on the wall. Can you say “uncomfortable”?

According to crazy dude, “I left the sock on because I’m religious.” That’s it-I know what I’m wearing to shul next Yom Kippur as I streak across the mechitzah. WHO’S WITH ME???

(Thanks, Mort and Tony.)