Guess where I went last night? A wedding! Good times had by all…mazal tov, Mark and Hadar!

As an addendum to last week’s Idiot’s Guide to Israeli Weddings, here are a couple more observations I forgot to include. Read that first if you haven’t already…

–Upon entering the wedding hall, you may see TV screens mounted on the walls around the room. Whereas in America, you might expect them to display a video montage of baby pictures of the couple, here they show some random morphing color show that looks like the thing in Windows Media Player. I know Israelis aren’t big Mac users but I can’t help but feel that I’m missing something here. 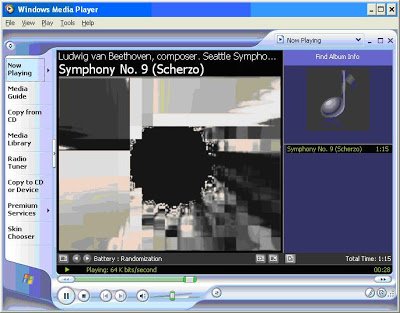 Welcome to our happy event!
–Israeli weddings are much bigger than your typical American or Jewish American wedding. In the words of someone last night, “everybody is invited.” As far as I can tell, the invitation process works like this: from a height of 40,000 feet, a blimp drops several thousand invitations over population centers of the country. Whoever picks one up, and…proceeds to then invite everyone in the phone book.–Israeli men are more fun than American men on dance floors. In America, this territory belongs to the women. Men may or may not dance and usually do so in a fairly non-descript fashion with female dance partners. Remember Bar-Mitzvah parties? Women were the brave ones who formed the circle in the middle while the boys were off somewhere being doofuses (I’m not sure the doofus behavior is connected to our age.)Last night, once the house/techno/trance (Can someone please tell me what that stuff is called? I only know that I wake up each morning and thank my creator that it’s not on my ipod) came on, the men went nuts, dancing and jumping together on the floor, arms flailing furiously as they laughed, sweated, and had a wild time. We could probably learn something from them. (While we’re at it, I’d also love to learn from them how to maintain that perfect level of four-day scruff. How does it always stay that length? Amazing.)

–There is absolutely zero correlation between appearance and job in this country. In America, someone might look at a hottie patottie and say about a profession, “that job’s beneath her.” Here? Not a chance. I don’t think this says anything about attitudes, just the preponderance of attractive people here. I’m not saying the staff of servers last night were hotter than the Negev in July, but…ok, yes, that’s exactly what I’m saying.

(Stay tuned for next month’s article about Israeli fashion and beauty in the Atlanta Jewish Times’s supplement. Should be a good one.) 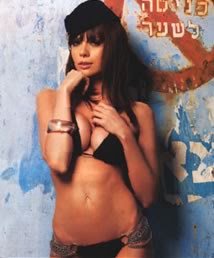 What if this woman came to fix your plumbing?
Some guy just threw an entire roll of Charmin down the toilet.
–And two more things about fashion: if I am lying, let G-d strike down every falafel place I’ve ever eaten. Some guy last night had a white shirt with a dragon on the back. Ok, it’s time…I HAVE GOT TO BUY A NEW CAMERA.Secondly, after getting dressed for the event and walking out of my room, my roommate, a female, starts to critique my outfit of choice. I had on a solid, blue, long-sleeved dress shirt, jeans, and Pumas. Because I won’t let myself speak English with her, I’m not exactly sure why this shirt was not appropriate, or the Pumas, one of my few articles of clothing which apparently are cool. (I half expect one of my friends from New York to break the news that Pumas are now the most dorky thing in the world and what am I thinking owning them? If this happens, I am moving to an island in the South Pacific and wearing nothing but grass skirts.)
9:21 AM “Omig-d, Trevor, those are soooooooooooo cooooool!”
9:22 AM “What are you WEARING??? GROSS!!!!!!!!!!”I hate fashion.
So, since, of the two of us, she is in fact the native of this country, I changed my clothes after spirited debate and put on something more Israeli (the color black). Upon my arrival to the wedding, I made note of something which I would call the 614th commandment:Thou shalt not worry about possibly being under- or inappropriately dressed at an Israeli wedding.

Seriously? I really thought I might offend someone? With all the sneakers and designer t-shirts…not a chance anyone was gonna notice me.Bottom line: everyone had a good time and that’s what’s important.

I think this wraps up this somewhat exhaustive guide. At least till the next wedding.

Did I miss anything?