An Idiot’s Guide to Israeli Weddings

Well, my loyal readers, the weather’s heating up. You know what that means: that’s right…love is in the air. Wedding season is upon us so you best be prepared for it, Israeli-style. I had the privilege of attending a couple of weddings recently which gave me an up-close-and-personal look at matrimony, Middle East-style.

Now…Israeli weddings are somewhat different from in America so you’ll want to know what to expect beforehand. Buckle your selt belts, here we go. (This does not apply to religious weddings which I have yet to experience here.)

Attire:
Dress in this country is casual and weddings are no exception. I can’t even tell you the last time I wore a tie since moving here, if it’s even happened once. This makes for an interesting learning experience at your first wedding.

“Hey, who let the homeless guy in??? (pause) Oh, that’s the groom??? How’s he gonna break the glass wearing Crocs?”

Ok, so maybe that’s a bit of an exaggeration. Although for some reason, it is virtually impossible to find a plain white dress shirt in this country. Apparently clothing manufacturers receive government incentives to print their white shirts with a dragon on the back. Future immigrants, bring dress clothes with you. Forget the ties.

I know you’re not sold on it but wait till you see it with the cumberbund.

Gift shopping is definitely easier in Israel. “Ehhhhhhh…mah zeh Crate and Bah-rehl???” There’s no registry, people…it’s all about the Benjamins, baby. Or the Yitzchak Ben-Zvis. That’s right, cash money.

Guests are greeted upon arrival by a box in which to drop your cash gift, in an envelope of course. (So are you supposed to put a card in there too? At my last wedding, I just wrote my short message ON the envelope. Weird, I know…but isn’t the drop box/cash thing weird anyway?) Someone told me that the happy couple uses this money to pay for the wedding and you’re basically paying for your meal. There’s a joke here somewhere. Commenters? 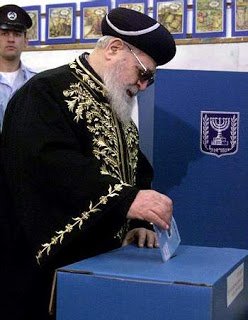 Voting for Knesset or leaving his gift? I guess we’ll never know…
(Hey, as long as you’re here, care to officiate?)

By the way, the guy on the 100 shekel bill is Yitzchak Ben-Zvi, the President from 1952 to 1963. He’s wearing a tie. Looking sharp, Yitz! It might be time to change those glasses though.

Chupah:
In America, often the bride invites her hometown rabbi who then recounts his history with the happy couple: “When I first met Sarah in the junior congregation, I knew she was going to be a wonderful Jewish woman.” In Israel, the couple may or may not choose the rabbi by opening the phone book to the letter “resh” and throwing darts. When the two families join the bearded man under the chupah, the guests then join together and sing “one of these things is not like the other”.

Then the ceremony begins. The goal of the invited guests is to talk as much as humanly possible and pretend that a wedding is not happening. Bonus points are awarded for answering a cell phone.

Immediately afterwards, mass congratulation ensues. I wasn’t used to that. At my first wedding, somebody came up to me and said “mazal toooooov!”

(Confused look) “What did I do? Well, I did eat 12 egg rolls in 5 minutes. I just didn’t think anybody noticed.”

“Baby, you’re all that I want…when I’m lyin’ here in your arms…
I’m finding it hard to believe…we’re in Hevron.”

After the traditional couple slow dances, the party begins with the DJ playing one of the following songs:

1) “Put your HANDS up in the air, put your hands up….IN THE AIR!” (That’s all I know. I think those might be the only words.)
2) “Heeeeeeeeeeeeeeeeeeeeeeey, baby! (Ooh! Ah!) I wanna knooooooooooow……..if you’ll be my girl!

Holy cow-I can’t believe these are actually songs that are able to be found online. Is there anything not on the internet? Neither one of those however can possibly match the sheer ridiculousness of the following song. Here it comes…oh dear G-d…

3) A remix of “9 to 5”. I wish I were kidding. (Can people who are still alive roll in their graves? Dabney Coleman is rolling in something.)

Please note that the Israeli wedding is not to be confused with an Israeli dance party where the party does not officially begin until the DJ plays “Hips Don’t Lie”.

Holy ful, I swear this is true. At my friend Maya’s wedding a few weeks back, the party’s raging, she’s dancing up a storm, and everyone’s having a great time. When Maya does her rounds to say hello to all her friends, I ask her “Maya! How are you?” In just the right voice inflection that can’t possibly be conveyed in print, she responds “b’seder!” For the love of G-d, does anything get this populace excited? WHAT IS NOT B’SEDER???

Would winning a gold medal be b’seder? How about the lottery? The classic Disneyworld commercial just wouldn’t translate to Israeli TV. “Dudu, you just signed a peace treaty with the Palestinians to end hundreds of years of conflict!! Where are you going?”

Of course the whole American concept of wedding crashers would never work here. The country’s too small…everyone knows each other!

So there you have it. An Idiot’s Guide to Israeli Weddings. In conclusion, bring cash, dancing shoes, and be prepared to have fun.

Oh yes…and put your HANDS up in the air , put your hands up….IN THE AIR! 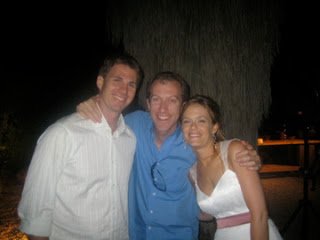 Geez…I almost forgot to include an actual picture. A happy couple.

Want automatic email updates for new posts? Sign up on the right!