If Channel 10 Runs This, I’m Suing

Posted at 1:24pm on Feb 2, 2008 in Culture, I Love This Place, Israelis Make Me Laugh, This Aliyah Moment is Brought to You by the Letter Aleph by Benji 0 Comments

It’s a small world, my loyal readers. No, I’m not channeling Walt Disney. I’m talking Tom Friedman, as in “The World is Flat”. Only a handful of years ago, everybody’s favorite Jewish state had two TV channels and American movies that often opened up months after their US release.

We even have the hit TV show “Survivor” (that’s a link to the Israeli version). For years, my friends made the joke till it got old: “Hey, you know what? Every day in Israel is ‘Survivor’! Ha!” Or “When are they gonna do ‘Survivor: Gaza’ ? ” But it’s really here so we don’t have to joke anymore.

Reality TV? Just as big here. And the biggest shows from the West all have their own Middle Eastern versions. “American Idol”? “Kochav Nolad“. “Dancing with the Stars”? “Rokdim im Kochavim“.

You know what I want to see? “Fear Factor.” Oh yeah. Israeli Fear Factor. This show would be so easy to write! All the challenges? They’re already here!

Not with spiders, people. In a car, with Israel drivers. I wouldn’t do it. All the cars here with their red “שמור מרחק” (shmor mirchak) bumper stickers…does anyone know what that means? You wanna know? I’ll tell you. “Shmor mirchak” actually means “I drive like a loony bin.” In case you were wondering.

Round two on Israeli Fear Factor? Twelve o’clock…on a Sunday…stand in line at Bituach Leumi. BEFORE A STRIKE. (Sorry, non-Israelis, it loses something in translation. I’ll leave it to my fellow olim…what does “bituach leumi” mean to you?)

If any contestants manage to survive those two feats, the championship will surely knock them out. Ready? Go to the shuk, lick the ground. 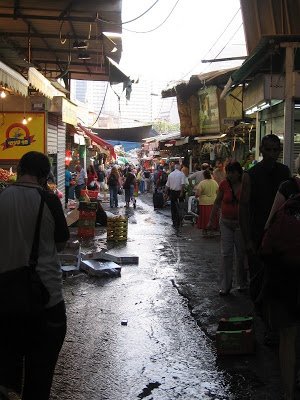 Americans, you think live roach-eating is gross? I will pay a shiny, new two-shekel piece to anyone who can correctly identify the mystery gunk on the ground of Shuk HaCarmel.

It’s only a matter of time. I can’t wait to see what other shows come here. “The Simple Life”? That’s easy. Moshav.