Posted at 5:42am on Jan 1, 2008 in Culture, I Love This Place, Israelis Make Me Laugh, Life on the Home Front, Now I'm Just Being Silly, Once in a While I Just Have to Vent, This Aliyah Moment is Brought to You by the Letter Aleph by Benji Lovitt 0 Comments

On my last trip to the States, I came across this in the airport bookstore: “Excuse Me, But I Was Next: How to Handle the Top 100 Manners Dilemmas” by Peggy Post. 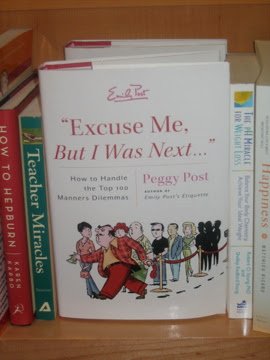 Over the next 45 minutes, I proceeded to be be drawn into one of the funniest books in the history of the world. Here’s Amazon’s description:

Have you ever been annoyed by cell phone yakkers, line–cutters, movie chatters, or noxious neighbors. . .

Yes, I have. And if you don’t know where this is going, seriously, you’re at the wrong website.

been confused about who pays at a restaurant…spotted someone double dipping…gotten a gift you hated? America’s etiquette expert Peggy Post comes to the rescue in this concise, readable book devoted to the top 100 etiquette issues everyone wonders about….Peggy addresses them as only she can––in her direct, fresh, unpretentious style. You’ll learn how to politely say”no” to difficult requests, how to introduce someone if you’ve forgotten their name, damage control for email bloopers, what to do if people don’t reply to your RSVP, how to actually get your kids to write thank–you notes, and much more. Peggy Post captures the essence of etiquette for today’s world, distilled into the perfect gift book.

Ok, let’s get right to it, shall we? Israelis right now are already laughing.

Chapter 2: Top 10 Nosy Questions and Quick Retorts
Q: “How much money do you make?“
A: “Not enough to buy the house that’s going up down the road!” Israelis, you can now make fun of Americans for being fake and passive-aggressive. How about “none of your business, assface. Any more questions?” Or “I’d rather not answer that question.” Call me crazy.

Q: “Have you had work done…like a facelift?”
A: “Hey, do I look younger?It must be all that clean living!”

What kind of person would ask that last question? And has Peggy written her follow-up book “Stupid Questions and the Morons Who Ask Them”?

Chapter 6: Cutting Ties with Your Hairdresser
“Breaking up with a hairdresser is like ending any relationship…the key is to be honest and polite.” I guess so…if you’re ****ing your hairdresser.

Q: I was in a long line at store and waiting quite a while.A new line opened and the woman who just joined the end rushed to be the first one. The cashier started ringing her up.What should I have done?
A: Immediately say, “Excuse me, but I believe I was ahead of you.” If he doesn’t retreat, don’t push, go speak to the manager.

We call this person a “freier“. Can you say “freier”, boys and girls? Talk to a manager??? Can you even imagine trying that here? “Nu, mah ani a’aseh??? Kacha zeh b’Yisrael!!!”

Peggy continues: “If you don’t want to confront them, the antidote to rudeness is to kill ’em with kindness. ” Ok, let me think about that for a second….HAAAAAAAAAA!!!!!Whew, that was great! (laughing, wiping away tears) Kill ’em with kindness? How about with a machine gun? “At very least, it may shame them into acting more civilized.” Freier.

You could also sing this fun song…

Why do people look upset here?This isn’t normal in America?
Do you know what we call it here? Tuesday.

Ch 22: Limits of Generosity
Q: When a co-worker miscarries, never say “it was for the best” or “it was God’s will.”

Gee, do you think so? Hey everybody! Be sure to buy next book from Peggy Post:”Excuse Me, But I Think You Just Ran Over My Dog”, giving such useful tips as “Things Not to Say When Your Loved One Gains 700 Pounds”

Ch 28: Internet Dating Etiquette
“Post only an up-to-date photo.” Listening, Jdaters? “Arrange a first meeting in a public place and limit the duration.” If you don’t know that, there’s a reason you’re single. Hmm…I’ve never met this guy….he won’t divulge his job…he doesn’t have pictures posted…I know! WEEKEND GETAWAY IN THE CAYMANS!

Ch 43: Dressing Downer
Q: When together with friends, my 15 year-old insists on wearing grungy jeans and a t-shirt. I tried to get him to dress nicer but he says that’s his style and to leave him alone.
Benji’s A: Have you considered attending a wedding in Petach Tikva?

Ch 50: How to Eat a Cherry Tomato
I am not even kidding. LADY, IRAN IS DEVELOPING A NUCLEAR BOMB TO BLOW US ALL UP!!! FORGET THE CHERRY TOMATOES!!!

Ch 59: Flying the Unfriendly Skies
Q: I’m fed up with parents who let their children act up on airplanes.During the last few flights, I’ve been kicked, poked, and tormented with nonstop whining and tantrums. How do I make it stop?
Benji’s A: Switch to Israir

Q: My wife’s company is holding a holiday party.I’m world’s worst communicator…advice?
A: “Be well versed on current events.”

“Steer clear of controversial topics.”
So it wouldn’t be wise to say “So I’m thinking about moving to Hebron…thoughts?”

Q: At a party, I started talking politics and the discussion got heated.The host seemed uncomfortable.I enjoy a good debate and think our argument was civil but my wife insists it was rude.Who’s right?
A: Discussion of an interesting topic can be a great party activity, provided no one curses or resorts to full-scale argument. Most subjects (the market, sports, politics) are fair game as long as the expresser rationally listens with an open mind and refrains from insisting too vehemently on his views. Unless the conversation amounted to all out verbal combat, it is not rude.
Benji’s A: Were people screaming at each other and yelling “mah karah lecha???” If so, this is called talking. You are too sensitive.

PTA Pressures
Q: A parent from the PTA keeps calling me to help me with school projects but I’m overwhelmed with a job and kids.What should I do?

FOR THE LOVE OF G-D, SAY NO! Or say you have miluim (army reserves) for the next 6 months. That’s the Israeli version of “ooooh, I wish I could but I have to wash my hair.”

Telephone troubles
Q: As the pace of modern life speeds up, rudeness seems to escalate.Here are some of the most offensive and rude behaviors.
1) Cell yell: Broadcasting cell conversation in public as if the person were hard of hearing.

Dude, people are smoking IN THE MALL here.Do you think they give a rat’s ass about whispering?
Example: I was in the bathroom at a restaurant and the woman next to me was on her cell phone!I was forced to listen while others waited.Is there anything I could have done?

Yes, politely ask her to use movie theater.

2) Driving recklessly: Zipping from lane to lane and generally driving like maniac

Did that say manyak?

Q:I was 5 minutes late for interview.I didn’t get job even though I was qualified.Was lateness the reason.
Benji’s A: 5 minutes???YOU’RE HIRED!

Q:I am female and my male client likes to greet me with a kiss.It doesn’t bother me but my boss thinks it’s odd.Should I ask him to stop? I don’t want to offend him and possibly jeopardize our business relationship.
Benji’s A: Has he considered running for Knesset?

Peggy Post is today’s recognized leading authority on etiquette.She was also rejected by Nefesh B’Nefesh and will never live in Israel.