The latest tour of Avi Liberman and his Crossroads Comedy tour has just about concluded and last night was the Tel Aviv show. All proceeds benefit the Crossroads Center in Jerusalem and their at-risk teens, of whom Caryn Green is director. I’m proud to say I’ve been friends with both of them since we all grew up together in Young Judaea in Texas.

Reggie and John, neither of whom are Jewish, had the crowd in stitches with their best efforts at Hebrew and perspectives on life here. John had a great joke about Jews always being unhappy and pessimistic, pulling out a 50 shekel bill which has Shai Agnon looking pained, head in hand, seen here. 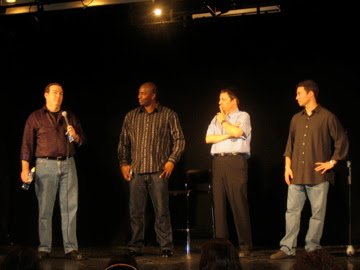 Doing a Q&A after the show for the packed house.