Posted at 2:43pm on Nov 11, 2007 in Israelis Make Me Laugh, This Aliyah Moment is Brought to You by the Letter Aleph by Benji Lovitt 0 Comments

A Google search of “Israeli bureaucracy” brings up phrases such as “struggle”, “coping”, and “what have I done to deserve this?” Ok, I made the last one up. But talk to any native Israeli or immigrant and you’re bound to hear stories of not just long lines, but decisions void of logic made at the whim of the particular clerk you get at any given time. With this in mind and sense of humor by my side, I decided to brave the Tel Aviv municipality building recently in pursuit of one of my aliyah benefits. 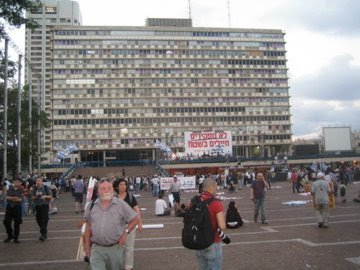 Located in Rabin Square, the iriya building is home to Tel Aviv’s city council. For those of you who don’t speak Hebrew, “iriya” is loosely translated as “in exactly what year did this building look nice???”

Interviewer: “Ehhhh…how are you at extending your arm while holding a small piece of paper.”
Candidate: “Zzzzzz……”
Interviewer: “You’re hired!” 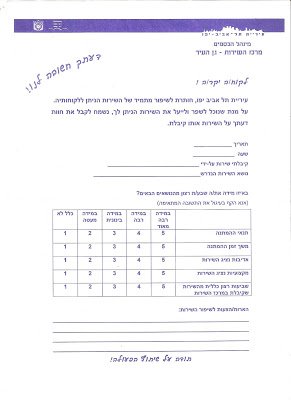 Shouldn’t the numbers go right to left?
I guess it’s gonna end up in the trash anyway.

B’seder, whaddya gonna do? After having my landlord make a new lease, I returned to the iriya shortly thereafter and dealt with it. Not so bad, all in all. I usually make sure to speak poor Hebrew and look homely, sort of the equivalent of the woman batting her eyelashes at the cop who pulls her over. Not that anyone finds it attractive, but I figure it can’t hurt, right? And when you’re at a government office, you probably need all the help you can get.

You’re telling me, after that post, that you don’t want to get updates delivered to your inbox? Not buying it for a second. Go sign up on the right. Do it.