Posted at 4:16am on Nov 11, 2007 in Current Events, I Love This Place, Israelis Make Me Laugh by Benji Lovitt 0 Comments

Hello, my loyal readers: after a prolific October, seems that it’s been a while since our last posting. But here’s a story I can’t ignore, especially since I can’t miss being what seems to be the first to press with this groundbreaking story, and because I had an exclusive invite to yesterday’s private opening night party…without further ado…HOOTERS ISRAEL!!! 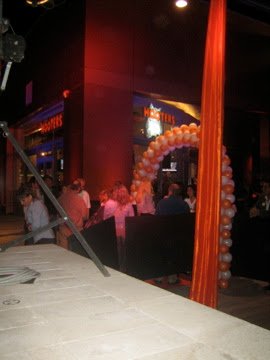 And just like that, orange takes on a new meaning in Israel. The logo as seen on the sign is the traditional one; no Hebrew translation. The restaurant is located down the street from Ikea, near Netanya. The biggest question everyone seems to have is “why not Tel Aviv?”
Not sure. I forgot to ask. 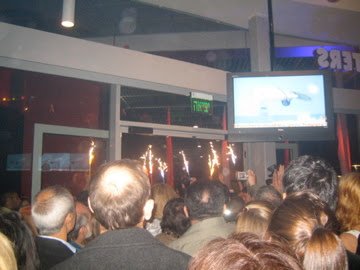 Sparklers kick off the event. “Ehhh…Dudu! The TV! Mah zeh NASCAR???” The place was packed. I was able to easily identify the Americans, as there were several there from the US Embassy and armed forces. I even ran into someone I’d met before whose picture was posted here a couple of months back (is it wrong to out someone at Hooters? I’ll just be vague.) 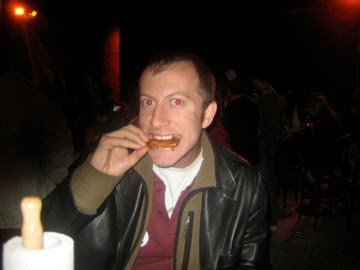 Not bad! But where’s the blue cheese dressing? All the food and drinks were free. Wings, onion rings, calamari, and even a sighting of mozzarella sticks. Definitely unlike any other meal I’ve eaten in Israel. And the answer is no, there was no chumus. 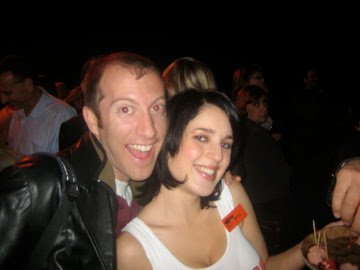 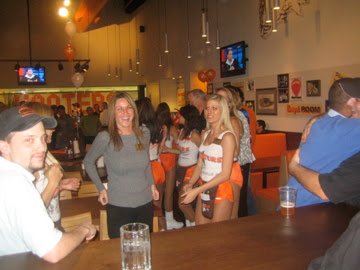 At least half the staff, including the waitresses and cooks, were flown in from America for a couple of weeks, creating some surreal interactions. Watching “Osnat” and “Bethany” do the verbal tango over who was going to carry the wings tray was high comedy. Can you play “find the American” in this picture? 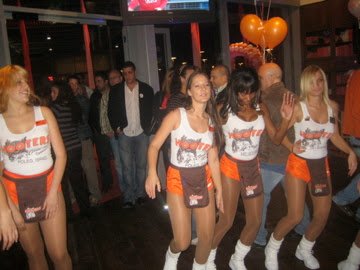 If I’m not mistaken, they’re doing the mayim step. About this time, roughly 483 male patrons congregated to take pictures. (Ok, I guess I was one of them. Hey, I’m a media member.) I saw someone carrying a microphone from Walla! along with many other cameramen. I was a little surprised that the peace talks were scheduled for the same day but it’s the busy season, I guess.

Much, much more to report, coming soon. 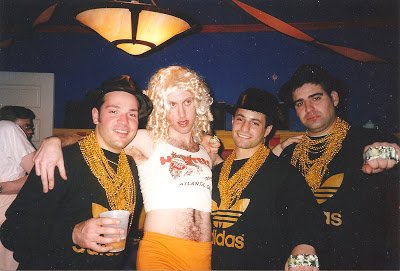 On that note, look what I just dug out of the archives from Halloween 1999: an unidentified Hooters waitress with Run DMC. I think I got hit on by a cop that night. How many readers did I just lose?