Olmert and Abbas: Hot or Not?

I recently came across the website MyHeritage which, with the use of face recognition technology, will create a collage of your very own celebrity matches in about one minute. Sorry to digress already but I feel the need to say “ARE YOU FREAKING KIDDING ME???? WHAT YEAR ARE WE LIVING IN????” If I had seen this just ten years ago, I would have seriously gone into cardiac arrest. I remember the first time I discovered “virtual flowers” in like ’97; that was arguably the coolest thing in the history of the world. In the last couple of days alone, I have edited a movie, added it to Facebook for the world to see, and video-chatted with an old friend in Los Angeles. Seriously, that is straight outta the Jetsons (wasn’t that an NWA album?) Point is, I’m always shocked that everyone just accepts the unprecedented leaps in technology with so little awe and perspective. (In just a couple of clicks, I was also able to decipher the words to a Milli Vanilli song. This could never have happened 15 years ago. Should I have kept that to myself? Girl, you know it’s true.)

Anyway, here are my results. 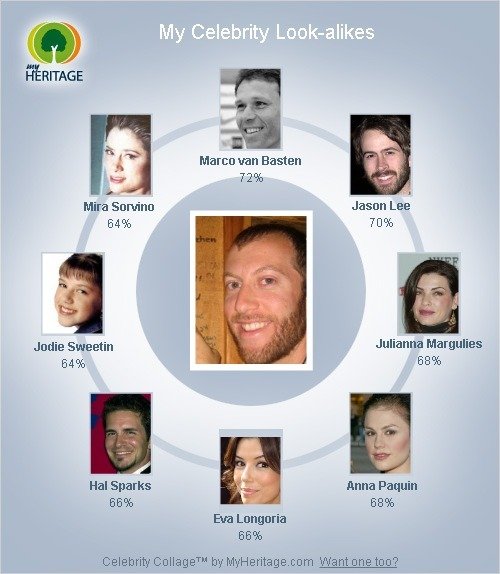 Some of the initial thoughts which crossed my mind…

Then I wondered, what other tests can I run? And can I draw any meaningful conclusions from them? Here’s round two. 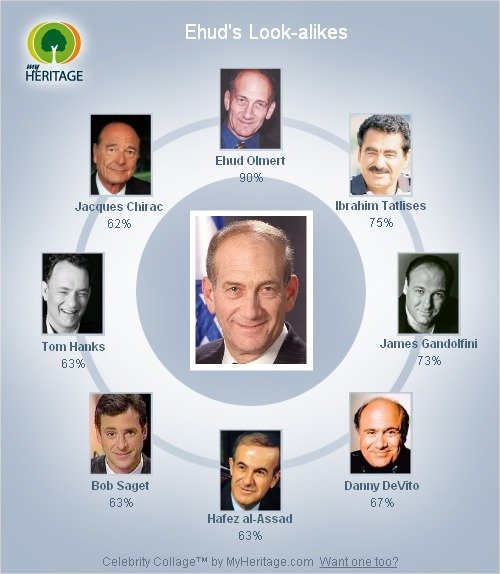 Notice anything strange? Apparently there’s only a 90% resemblance of Ehud Olmert to himself. That’s like the story of Charlie Chaplain placing third in a Charlie Chaplain look-alike contest. There must be some kind of political joke to make about the “Olmert twins”; I’ll leave it to the commenters. Whatever, I don’t think I want either one of them leading my country.

Next, coming in at 75%, is Ibrahim Tatlises. Who is he? According to Wikipedia, he’s a Turkish singer of Kurish and Arab origins. James Gandolfini? Danny DeVito? Fuggedaboutit! What would these guys have done during the Lebanon War? Forget sending in the troops; one phone call and Nasrallah would be sleeping with the fishes.

Al-Assad? CHIRAC??? What, was one woman bouncing around from country to country, sleeping with powerful men? And couldn’t she have chosen more attractive ones? Ech omrim “combover?” 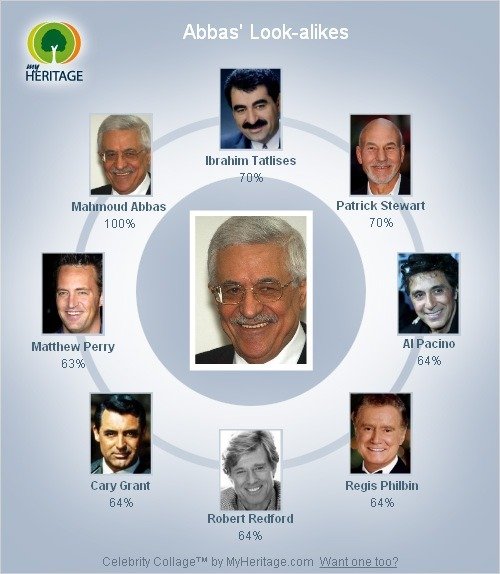 Abbas most closely resembles himself. Thanks, MyHeritage. I’ll be buying your stock never.Ibrahim Tatlises again???? What the hell??? What does this mean??? Could he be the key to Middle East peace, a unifying figure to both peoples, like Abraham is to the Jews and Muslims? Like Elizabeth in the classic mini-series “V”, the half-human, half-alien baby? WHO IS THIS MAN???

And more importantly, who’s excited for the 2008 release of “V: The Second Generation?” Between this and the upcoming Indiana Jones movie, 2008 is going to be an incredible year. If Wham! decides to get back together, please don’t wake me (up before you go go.)

Sigh…try as I might, I can’t seem to come up with any more significant meaning. What will this upcoming year bring in terms of peace? Who does George Bush look like? And what I need to do to get George Michael and Andrew Ridgeley into the studio?

I have more important things to worry about. After all, there’s a 64% chance I look like Stephanie Tanner. Time to grow back the beard.

****************
How the MyHeritage application works: http://www.myheritage.com/FP/Company/how-face-recognition-works.php