Maybe She Was Trying to Land a Job at Hooterim

An officer at the base told her she was under arrest and demanded that she return to the interrogation room, at which point the soldier took her shirt off and told the officer: “Let’s see if you can arrest me.”

The soldier took advantage of the officer’s momentary lack of concentration and quickly left the base. She was caught a short while later.

During a hearing at the military court in Jaffa the prosecutor demanded that the soldier, who was discharged from the army due to psychological disorders, receive jail time for her actions, but the judges ordered her to pay a NIS 1,000 ($250) fine.

A momentary lack of concentration? Did he enter a catatonic state? And what message does this send about the preparedness of Israeli security? I could really use a microwave…any of my busty friends want to, ahem, “pick one up” for me? 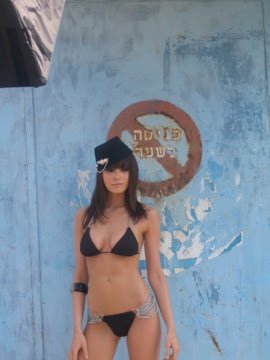 Nivit, can you stop at Home Center? No need to bring your wallet.
Photo credit (Me, as I was drooling)

BREAKING NEWS: Mysteriously, about five minutes after her escape, the men’s bathroom was found locked with no answer.