“How I Spent My Summer Vacation.” Six words which bring back memories of elementary school and long layoffs. Kids returned to school with stories of…umm., what were their stories about? Lemonade stands? Swimming pools? Having gone to summer camp for as long as I can remember, I always wondered what the heck kids did who stayed at home between June and August. Whaddya mean not everyone has heard of ga-ga, the sport which separates the men from the boys? It’s not normal for a group of forty-five kids to stand on tables and sing songs about having the “bagel blues”? And don’t even pretend like all Israeli teenagers aren’t tsofim (scouts), traveling around the world to spread their goodwill through ridiculous cheers and pita-making. Laugh all you want, my loyal readers, but for those of you who had the privilege of attending Jewish summer camp as a kid, you recognize these behaviors to be completely normal. (For all the camp freaks out there, you can laugh and relive your youth here. And to those of you who are staring blankly at your monitor, what the heck did you do from June to September?

Of course, we all know that although we didn’t realize it at the time (nor did our parents probably), camp was less about the rules of ga-ga and more about the lifelong friends we made and the experiences we had which would tie us to our Jewish identity much more than however many thousands of dollars my parents poured into Hebrew school three days a week. Saying we weren’t motivated for Hebrew school is like saying Michael Vick wasn’t motivated for his plea trial.

Summer camp is an environment that simply can’t be found anywhere else where kids learn without realizing it, grow exponentially in a matter of weeks, and become who they are with and because of the people they are surrounded by. It’s not hyperbole to call it one of THE most influential and identity-forming experiences that a Jewish teen can experience and it’s for that reason that in recent years, more and more attention, praise, and money are coming the way of Jewish camps. (Foundation of Jewish Camping, you can make my check out to…)

For various reasons which I won’t mention here (such as a desire to pass on my love for this crazy country), after a short fourteen year break, I decided in the spring to return to Young Judaea’s high school camp, Camp Tel Yehudah. Throughout my summer and after its conclusion, I was inevitably asked the following question by roughly 8.3 bajillion of my closest friends, all of whom attended camp along with me back in the day: “well, how was it?” The answer was usually some combination of “good”, “it feels more like a job at this age”, and “while I often felt like a 90 year-old, camp doesn’t change.” Sure, they can’t live without Facebook. And, fine, maybe they’ve never heard of Wham! (although this statement may say more about me than them)…but camp is still camp and the magic always remains, no matter how old you are.

To answer those of you who have asked “when are you going to start writing again already?” questions and finally address my anxiety of trying to summarize the last 3 months in less than 10,000 words, I’m going to end the summer wrap-up there. Yes, there were the hilarious “how to be a gever gever” lessons I received from my manly Israeli staff members…and the quite useful Hebrew slang brought to my attention about “returning to deh Blohk-bahs-tehr deh movie you ahr lee-veeng een”…but I’m back in Israel for another year, and looking forward to more cultural differences, distasteful English t-shirts, and of course…EHHHHHHHHH…….

So welcome back, my loyal readers…forward this blog to your friends who possess a sense of humor and love of Israel, and let’s get it started.

Just a few pics from the summer… 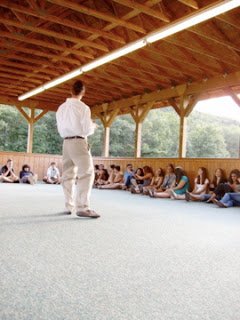 Giving an inspirational Shabbat talk to my 47ish 11th graders. Clearly, they’d rather be on Facebook. 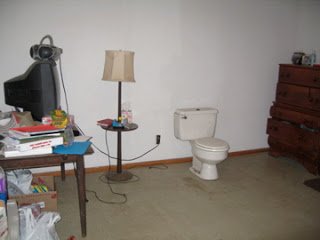 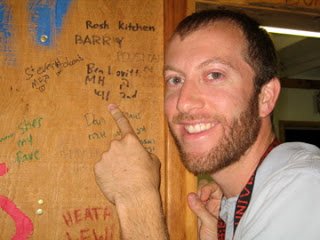 Once upon a time, in 1991 (as evidenced above), I was “Ben.” The animal growing on my face was last seen in Texas crossing a highway. 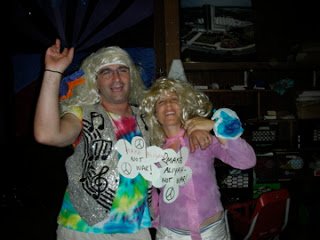 An Israeli couple dressed up for the themed end-of-summer banquet. For some reason, I remember the hippies spreading a different message. (If you can’t read it, the signs say “Make aliyah, not war.” The Jewish Agency is loving this.) 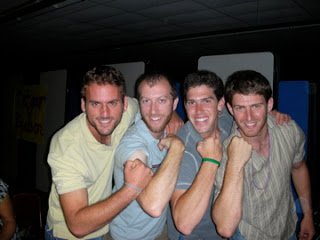 The aforementioned gever gevers. Well, three of them anyway. 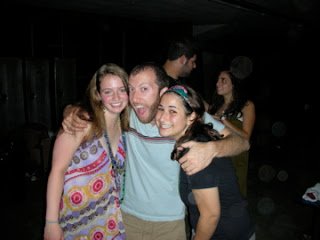 Only at camp can a 32 year old befriend 18 year-old women without law enforcement intervening.