If You Build It, They Will Come (After They Laugh at You)

Posted at 2:03am on Sep 9, 2007 in I Love This Place, Jew Stuff, Life on the Home Front, Once in a While I Just Have to Vent, This Aliyah Moment is Brought to You by the Letter Aleph by Benji 0 Comments

As I sit here thinking about how I described Rosh Hashanah last year, struggling to exude the same emotions as I did then, I’m finding myself with a small case of writer’s block. While the holiday is still extremely meaningful, perhaps there’s only one first time. Although my dinner erev chag was incredibly delicious, what was lacking was my four-minute Oscar speech to Rani’s family about how incredible it was to be here and how the chagim here blow away those in the States (it was about 15 seconds this time, no less passionate). I guess that’s part of the process. However, getting another “chance” to experience this time of year, I’m looking forward to making choices on how to celebrate, taking into account what I did the first time around and what I didn’t do last year. Stay tuned.

So my 2nd Rosh Hashanah as an oleh has come and gone. What a great time to be in Israel. Everyone wishing another “shana tovah” and “chag sameach”. Great weather, smiles. Nothing like it.

The afternoon before chag, I made my first trip to the beach since my return and was not disappointed. The water was amazingly warm and the view of the tayelet from the sea was amazing. I ate dinner that evening with Rani and unlike last year, decided to attend services the next morning.

I was going to put on a suit and take a day off from work until I remembered…oh yes…I live in Israel.

I should again mention Beit Tefilah. Thanks to my friend Assaf who plays piano there, I discovered last year a kehillah (a community) which is modeled after Bnei Jeshurun on the Upper West. Friendly, secular (as it’s called here, closer to Reform Judaism in the States), a real welcoming feeling. Several other olim from various places. I went for a couple of hours in the morning and then grabbed lunch on an outdoor patio in Neve Tzedek with Assaf and another friend. Rosh Hashanah feels like Shabbat-a relaxing day off with more meaning. Put it next to the weekend and I’ll tell you what you’ve got, my loyal readers. You’ve got a three-day break with lots of time for beaches and coffee.

You know what else the new year means? New beginnings. New adventures. New furniture. It’s year two, baby: time to drop some cash. I bought a desk from Office Depot to organize my room. Nothing fancy, believe me. For those of you who don’t know me, I seem to have been born without the male gene which is responsible for assembling things playing Madden football, and assembling things. I once said to my friend Hillery: “The man of the house is supposed to be the one who does all the home improvement stuff; what am I going to bring to the table?! I CAN’T EVEN BUILD A TABLE!” Hence, my purchase of the simplest model in stock.

I swear, especially after watching my friend Ari put together a bed, a closet, and Stonehenge, I told myself I was going to give it a real shot. So I tear open the box, hoping for a nice English-style manual with instructions, graphics, and such, only to find this. 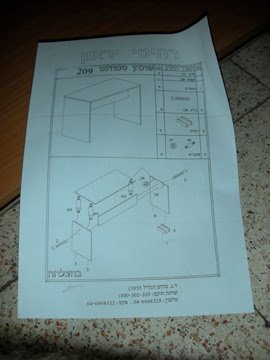 No instructions, just one page with a graphic showing every step seemingly happening at once. No order. If Einstein had been hanging out in my living room, perhaps I would have been more successful, but my relationship with space and time is pretty much the same as yours. They even threw in extra pieces just to confuse me.

The most humiliating part about these “de-structions”? In the lower left corner, they read “b’hatzlacha (good luck)!” Not only did they give me no chance to build this thing, they decided to rub it in as well. I could practically hear them laughing miles away. 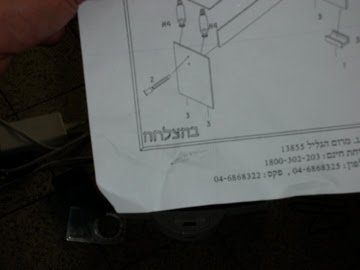 Within roughly five minutes, I summoned my roommate Rotem who apparently received the same engineering degree I did. No luck. I told him how I had to convince the taxi driver to pick me up with the boxed-up desk in the back seat.

Driver: “Mah zeh (what is this?)”
Me: “Zeh shulchan (it’s a table)!”
Driver: “Zeh hovala! (This is a move/you need a mover!)”
Me: “Nu, ani gar chamesh dakot m’po (Come on, I live five minutes from here).”
Driver: (silently deciding how much he wants to screw me) Shloshim shekel (thirty shekels, well above the meter)”

What, he’s gonna up the price because he has a box in the back seat? What the hell? I told Rotem this and he responded, “If you were fat, would he charge you more too?”

Anyway, the story ends in embarrassing fashion with Rani coming over and putting it together in FIVE MINUTES. He might as well have just taken my genitals as well.

Hey, but now I have a desk. Thank G-d my room has a built-in closet. Shana tovah to all of you, my loyal readers. It’s gonna be a great year.