Milk, Honey, and the Anti-Semitic Bees That Give It

Well, I broke my promise to post soon but hey, that’s the reality of summer camp. I even wrote this 2 weeks ago and saved it in my Drafts view since then. I feel terrible about it, my loyal readers, I really do…please bear with me for a few more weeks and we’ll be back to normal. My return date to the land of milk, honey, and wearing jeans to weddings is September 5th. Fortunately, there are around 50-something wonderful Israelis at camp with me to make me feel at home. So much to say about camp…so little time. In the meantime…here’s an article that a friend sent me recently.

Remember our dear furry friend Farfur? The Mickey Mouse ripoff who entertained his Palestinian viewers with anti-Semitic and anti-Israel vitriol? 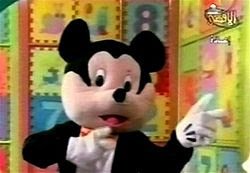 Hopefully you Tivoed the little guy because you won’t be hearing from him again. Check out this recent article from the NY Times…

Hamas television, which was criticized for a Mickey Mouse-like character named Farfur who spouted anti-Israeli and anti-Jewish nostrums at children, has replaced the mouse with a bee named Nahoul, who says he is Farfur’s cousin.

Farfur was beaten to death by an Israeli who wanted his land on the previous episode of the children’s show “Tomorrow’s Pioneers.”

In the name of Allah, this Israeli murderer must be brought to justice. I am offering 10 blocks of cheese as a bounty. Shiva to begin tonight.

Seriously, does anyone know where to get a copy of “Tomorrow’s Pioneers”? Netflix doesn’t have it nor is it on IMDB. I’m all caught up on “24” so I need a new show to latch on to. Will they be making a big-screen version of this, a la “The Dukes of Hazzard”, “Beverly Hillbillies”, and “Starsky and Hutch?” Who would play Farfur? The way I see it, they can go the Dreamworks/CGI route and have Haley Joel Osment voice him or they try live-action and have Alan Rickman, Die Hard’s Hans Gruber, play our furry friend. Since he worked on a play about Rachel Corrie a few years back, the casting is perfect.

Now I really have a reason to get cable when I return to Israel.