Posted at 4:21am on Apr 4, 2007 in Benji's Getting Serious, Culture, Jew Stuff, This Aliyah Moment is Brought to You by the Letter Aleph by Benji 0 Comments

Q: How do you spot the American on Yom Hazikaron?

A: He’s the one showing up to the office on time (if at all), not wearing a white shirt. Today I’m the American.
Last night began Yom Hazikaron, the day to remember the fallen soldiers who lost their lives defending Israel. In my first post ever from Israel, written as the war was ending, I wrote that because I hadn’t been personally touched by loss, unlike every single person in this country, I wasn’t able to appreciate what they were going through. I felt the same way last night as I joined thousands of people gathered at Kikar Rabin to commemmorate the fallen soldiers.
My boss Michal told me that this would be an especially emotional day this year after what happened last summer. If starting a public ceremony EARLY in Israel is any indication, she was right. This was not just any Yom Hazikaron. When I attended a demonstration for the MIAs in September, it started an hour late. Not only did the ceremony begin five minutes before the 9:00 PM start time, all of the MANY hundreds of chairs had been claimed and the security had already closed the entrances to the square, leaving who knows how many thousands of people congregating outside the barricades. 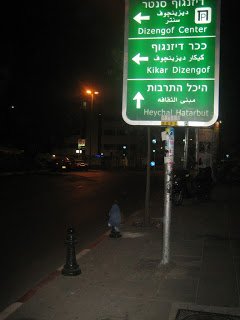 The streets going home at the end of the night. Not a car in sight.

For the next hour and a half, Israeli journalist and TV personality Yair Lapid introduced war song after war song, solemnly performed by well-known Israeli singers such as Harel Scott and Sarid Chadad. You didn’t have to understand a word to appreciate what was going on. The closer to the center of the event you got, the less talking you heard. To be accurate, there was talking, noise, and the occasional cell phone conversation in the surrounding areas of the square, and pretty much not a peep from where we stood and in front of us. If an alien was to come to planet Earth and try to explain to an outsider only what he saw (not judging what people were feeling or the magnitude of the cause)…the best comparison I can think of would be the post-9/11 tribute concert in New York. Or maybe a comparison isn’t fair to either. I don’t know WHAT else resembles this public song session.

As the singers performed and people around me joined them in song, I looked around and watched some of the audience members’ eyes LOCKED IN on the stage. As they joined the performers in song, I realized that, as powerful as the moment was, I was appreciating it from the perspective of an outsider. Israelis would probably tell me I’m lucky to not be able to appreciate what it means to mourn a lost family member, friend, or even distant acquaintance…and they’re right…but I probably represent all immigrants who yearn for the day when they too can understand what their fellow citizens are going through on a day like this.

This morning, at 11:00, the siren wailed across the country as everyone stopped in their tracks for a moment of silence. Here is an incredible video from Lisa of On the Face. This is Rothschild Boulevard, my favorite street in Tel Aviv, a place never lacking for pedestrians, baby carriages, dogs, and at this kiosk, socialite coffee drinkers. Watch.

If you haven’t been in Israel on this day, I hope you have the chance to do it at some point in your lives. There is nothing else like it. Let us all remember those who fell defending Israel and pray that their families and loved ones heal as best as possible.