Posted at 1:58pm on Apr 4, 2007 in Israelis Make Me Laugh, This Aliyah Moment is Brought to You by the Letter Aleph by Benji 0 Comments

Moving to a new country isn’t easy. There are an endless gauntlet of things to acclimate to: the language, finances, health care. Medical care differs significantly from that of the States. In America, a doctor has been through at least four years of college, four years med school, four years of residency, and possibly a couple more of a fellowship. In Israel? Apparently your success as a medical professional is reliant on your ability to dispense the wonder drug known as Acamol in large quantities. 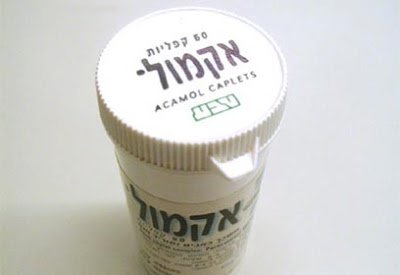 It’s never fun being sick; the last thing anyone wants in a weakened state is ambiguity and uncertainty at the doctor’s office. When I lived in the States, I saw the dermatologist at least twice a year to get my pale Ashkenazi-self examined, occasionally having benign skin lesions removed to be safe. Several months ago, here in Tel Aviv, I found myself completely and utterly lost navigating the health care process. What transpired in one short appointment with my doctor in America somehow required three appointments here.

Meeting #1: I see the dermatologist in his office. He spends two minutes looking me over and ten writing in his little book and engaging in a conversation with me about aliyah and Zionism. (This was mostly a good thing.)

Meeting #2: I see the “surgeon” to have the procedure done, or so I think. This time, the guy sits me down, scribbles in his book, and tells me what I’m going to have done the next time I come in.

Meeting #3: Dr. Frankenstein decides to shave a small area of my leg, inflict pain on me, and stitch me up, leaving a scar which remains months later. Ech omrim “malpractice lawyer”?

I was reading the New York Times’ “The Ethicist” a few days ago and came across a medical ethics question. I didn’t think much of it until I saw its origin.

When I went for an examination, my surgeon asked if two residents could be present. I felt uncomfortable being undressed in front of extra people, and so I declined. My surgeon scolded me, saying I was preventing the next generation of doctors from being trained. Why is it my responsibility to provide training for medical students? — name withheld, Beit Shemesh, Israel

How in the world did that unfold?

UFP: “I do feel a tad bit uncomfortable undressing in the company of others.”

I hope this woman had a more understanding gynecologist.