Posted at 4:39am on Mar 3, 2007 in Benji's Getting Serious, Culture, I Love This Place, Jew Stuff, This Aliyah Moment is Brought to You by the Letter Aleph by Benji 0 Comments

So Purim has come and gone in this Jewish state of ours…if you haven’t done so, be sure to check out a few pictures here. Although I did spend 9 months here back in ’92-’93, I barely remember a lot of the experiences, another sign that I ain’t a kid anymore. (Other signs include my pants sitting on my waist, as opposed to six inches below my ass, and my willingness to communicate with human beings through spoken word, rather than Instant Messaging.)

I feel like I’m experiencing a lot of Israel for the first time again, namely the holidays. Hanukkah, while not a major holiday religiously, was incredible to witness here, with sufganiot everywhere and public hadlakat nerots (candle lightings) on the street and in restaurants. I wasn’t sure what to expect from Purim but one thing became certain: this was not Halloween.

There’s a silly tendency for Americans to compare the two holidays because of, well, the costumes. After growing out of Halloween in my teenage years, I grew back into it in college when it became a reason to go out among a mass of audaciously dressed university students. Halloween was something we prepared for, trying to one-up each other to think of the best costume, or at the least, wear something entertaining, attention-grabbing, and original. It’s a damn shame my pictures are boxed up at my parents’ house or I’d post some of my personal faves from over the years: Kerri Strug, Hooters girl, and Dennis Rodman (in uniform, not wedding dress). My friend Philip who I spent many a costumes holiday with could always be counted to come up with some original ones as well including “X-rated crossword puzzle”.

I spent a long time planning my Purim costume and looking forward to the holiday, only to have the news broken to me by my Israeli friends that “it’s more for the kids.” In the days leading up to the weekend, I saw a ton of kids (and REALLY cute ones at that) dressed up as your standard kid personalities: dog, princess, Spiderman. And although there were certainly a lot of adults in costume last weekend, it just wasn’t to the extent that I expected, especially coming from New York where Halloween is a complete scene. Not only were there a large number of people not in costume, but it appeared that every street block could have been taken straight out of 1955. Pirate, cop, cat…over and over again. Nothing timely or thought-out; no Dr. Evil, no Borat, no Marv Albert with a garter belt and women’s panties. I was so proud of my costume until I became self-conscious for not being a cat. I also was a little disappointed at barely seeing oznei Haman (“Haman’s ears” or Hamentaschen in the Diaspora) anywhere as opposed to the omnipresence of sufganiot during Hanukkah. At no point did anyone I knew stop to buy one so I made a concerted effort to buy a couple which were just ok.

Fast forward to Sunday. I woke up at 6 AM to make my way down to Holon, the city where “my kids” live, for the “adloyada,” the biggest Purim parade in Israel. After the first few days of Purim festivities, I tried to temper my American super-sized expectations to deal with whatever “biggest” meant. The Salute to Israel parade in NYC is mammoth with who-knows-how many thousands of marchers and spectators and I figured this tiny country’s effort would pale in comparison.

Boy, was I wrong.

It was unbelievable. There were floats, loud music, kids with silly string (there was at least one, who decided to attack me with it…what can you do but smile?), and all kinds of parade-like visuals including this inflatable centipede carried by my group. 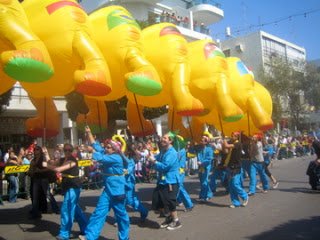 There were throngs of people everywhere… 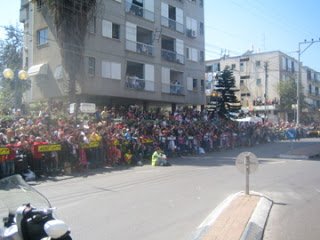 and the mood was amazing. Walking down the street with everybody in a great mood and cheering…if you were there and couldn’t get chills, you should see a doctor. It was so inspiring, precisely the reason I wanted to come to Israel. Listen to me, my loyal readers, and listen closely: EVERY JEW SHOULD SPEND A YEAR OF THEIR LIVES IN ISRAEL. There is nothing…NOTHING…like celebrating the Jewish holidays in the Jewish state. Practical or not, you should do it. After about 15 minutes of my “wows” and “omig-d”s, my boss Michal finally said, “NOW do you think Purim here is a big deal?” Yes, I do. How much was it a big deal?

I can’t wait for Passover. I never thought I’d hear myself say THAT.

Oh yes…and my costume. For those of you outside of Israel who didn’t hear, Israel was gripped a few months ago by the escape from prison of serial rapist Benny Sela and the ensuing nationwide manhunt. Every street corner of Tel Aviv displayed the following sign with the phrase “Let’s catch him together, call 100”, urging the public to assist in his capture. 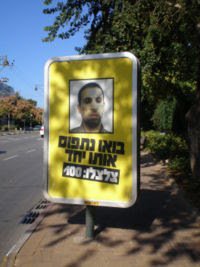 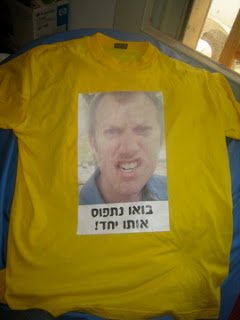 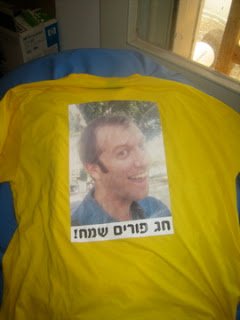 I guess I’ll return to the pirate costume next year.

(Post-script: Thanks, Amanda, for the much-needed female approval. After hitting “publish”, I wondered if I was going to get killed for allegedly making light of rape. To be clear, the shirt wasn’t doing that; it was satirizing the ubiquitious sign, the likes of which I don’t think had ever been seen before. I hope that’s clear.)