Posted at 4:57pm on Jan 1, 2007 in Benji's Getting Serious, This Aliyah Moment is Brought to You by the Letter Aleph by Benji Lovitt 0 Comments

Well, my loyal readers, I come to you with a sad admission. I, Benji Lovitt, am a freier. I’m far from the first immigrant to discuss this concept but I may be one of the few to use the word to describe myself. For those of you living outside of Israel, in the words of fellow blogger Brian Blum, a freier is the Israeli epithet for “sucker,” someone who gets taken advantage of. For an Israeli, being a freier is the worst possible outcome of any encounter. David Bogner claims that Israelis will do anything to avoid being a freier, especially on the roads. “One of the ways this manifests itself is through the need to constantly move forward in traffic. The person at the front of the line is the clear winner… and everyone else is a freier!” As for where this cultural attitude came from, I’ll leave it to the sociologists.

My pathetic adventure began a few Fridays ago, walking home on Sheinkin Street from the shuk. The streets are always packed on Friday mornings, as people are taking advantage of valuable weekend time before things close down for Shabbat. This day was no different. As I walked down a block void of commerce (just outside this building…) 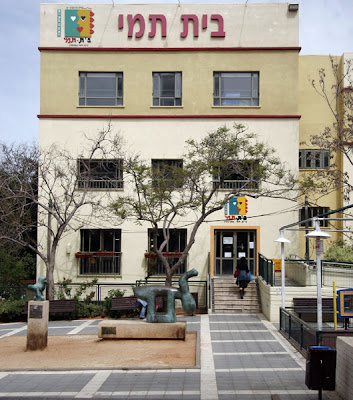 …I came across a guy doing a card trick on a makeshift table, surrounded by a few people. Being that the weather was so nice and I was in the heart of the people-watching district of the city, I stopped to watch. (To any of my friends who may already screaming “Nooooo!”, I reject that you might have suffered a different fate from me were you actually in my shoes and not reading the story from the safe confines of your office cubicle.) The guy was doing the classic “follow the ace” trick and, lemme tell ya, David Copperstein he wasn’t. This guy had the sleight of hand of Dom DeLuise. The observers surrounding the table were raking in the Jewish dough. This guy, 100 shekels, that guy, 100 shekels. It was like taking bamba from a baby.

Have you ever stood next to a hot craps table in a casino? When everyone just keeps winning and winning, and the dice are on fire? You can only stand there for so long before saying, “I GOTTA get me some of THIS!” It happened to me on a gambling trip to Lake Charles, Louisiana after college. I’m not a gambling man but when everyone around you is winning hand over fist, you simply can’t just stand there and not want in on the free money.

So I jumped into the action. The guy moved the cards around, asked me where the ace was, and I pointed to the middle card. He said, “show me your money”, presumably to make sure that I truly had what I wanted to bet. I took out my wallet, looked into it, and pulled out a 100 shekel bill. He flipped the card over, and…WHAT??? WHERE IN G-D’S NAME IS MY ACE?????? I stared at the card in shock, swallowed hard, and handed my money over to the guy, knowing immediately that something had gone horribly wrong in a very unkosher way.

No eems, vehs, or avals about it, this guy was a con. He switched cards as I was looking in my wallet. Dumbfounded, I sat down on the park bench next to two guys at a loss for words. We started talking, with me repeating “I can’ t believe it” and “what an @$$h#$%!” over and over again. When I suggested to the people next to me that I confront the guy and call him on it, they told me that I couldn’t prove anything (even while confirming that the guy cheated) and besides, I don’t know who this scum is or what he might do. Unbelievable.

When I called a friend of mine who will remain nameless, he was nice enough to let me know that I had fallen victim to the classic street con, the “three card monte.” As explained here, the lucky pedestrians who were winning left and right were in on it, and their fleeing from the scene of the crime went according to the script as well. Oh, and one more thing: he once lost $100 on the streets of New York the same way (although the guy may have used a different method of cheating.) I was further consoled by the very next person I told, who revealed that he too once fell victim to one of the classic New Orleans cons which I remember hearing as well.

What is the moral of this story? That this could only happen to a male. I’m not the most competitive person I know by a long shot, but when I saw the ability to make a quick buck, I couldn’t resist (and apparently, neither could my friends.) At least 100 shekels is only about $25, I told myself. Am I such a freier? No? Well, maybe I’m just an idiot.