It was brought to my attention last week that Friday, December 1st was World AIDS Day. Although we might wish differently (thanks to the recent UN voting), Israel is in fact part of this world and as such, commemorated this day along with the rest of the “civilized” world. Out of curiosity, I made my way to the Tel Aviv Cinematheque that afternoon to check out the scene.

It was pretty dead to my surprise. I had thought the significance of the event in a liberal city like Tel Aviv would have brought out more people (or at least the appeal of “free food”), especially on such a nice day. There was a photo exhibit which displayed the work of some carriers of the virus, along with a screening of an AIDS-related movie. Medical personnel administered free HIV tests as well (I knew there was a reason to carry my teudat zahut around).

So after 25 years of this horrible epidemic, my loyal readers, how might you expect to commemorate this unifying cause? Gee, I don’t know…how about by having two Israeli sperm/gevers* kick around a pink soccer ball in a condom-shaped balloon? Just a thought… 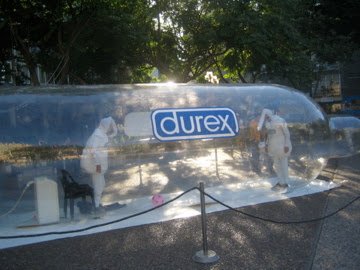 I wonder what transpired in their job interview… 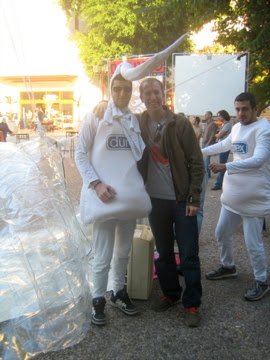 Thanks to this albino unicorn, AIDS awareness is through the roof.
(A certain blogger on the right.) 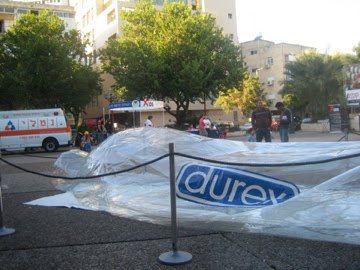 The “Biggest Condom in the Middle East”, just after the “Biggest…”
ok, I’m not going to finish that joke.

Cultural differences aside, let’s all hope that we don’t have to witness too many more of these events.