“Im tirtzu, ayn zo agada.”
If you will it, it is no dream. -Theodore Herzl

The Founder of Modern Political Zionism strived for a state where Jews could live as the majority in a country of their own. They would work in jobs across all classes: doctors, bankers, farmers, laborers…freely. Just as Herzl predicted, his dream was realized, just 50 or so years later. But do you think Herzl could have foreseen this? 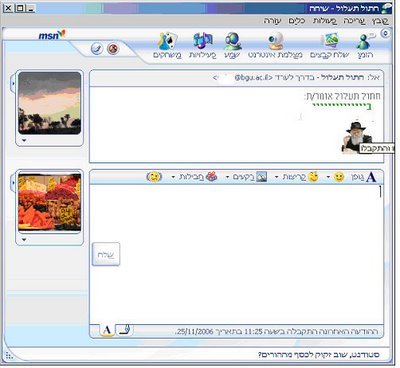 Yes, it’s MSN Instant Messenger in Hebrew. But that’s not all, my loyal readers. Just what is that icon at the end of the conversation?

If you look closely, might it just be one of these? : p

If you chose D), “waving rabbi”, move to the head of the class.

When my friend Ofra typed “רב” and hit enter, I almost died from laughter. She said “WHAHT? WHAHT? WHAHT AHR YOU LEFFING ET???” I said “TRUST ME, Americans are going to think this is the funniest thing ever” (and if not, I get to play the “you had to be there” card.) She just stared at me disbelievingly as I continued to cackle but I remain convinced. This was one of those moments where the perspective of the American oleh and Israeli-born sabra couldn’t have been any different.

WE’VE MADE IT! After 2000 years of exile, we now live in a country where we have our own IMing software with a FREAKING WAVING RABBI! How unbelievable is THAT? We have Jewish McDonalds workers, Jewish basketball players (well, maybe we always had that), and now Jewish teens translating “LOL, BRB, IMHO” into Hebrew. (Umm…they do do this, right?)

Usually when I have one of these moments, the Israeli I happen to be next to shrugs and says something to the effect of “beeg deel“. If that’s not a beeg deel, I don’t know what is. 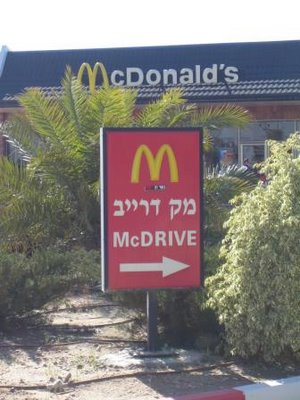 Israel drivers and customer service together…the most dangerous
combination since paper and fire.

SO MANY CAPTIONS…SO LITTLE TIME…

(I want to welcome new reader WriterGrrl to the party. Happy reading!)