Posted at 6:30pm on Nov 11, 2006 in I Love Hebrew, Mr. Miyagi, Now I'm Just Being Silly, This Aliyah Moment is Brought to You by the Letter Aleph by Benji 0 Comments

A couple of weeks ago, I chronicled my first day of Ulpan. It’s been three weeks now, 3-4 days each week, and it’s going great. I truly felt my Hebrew getting significantly better after only a week and a half of learning new words. One day, I was flipping pages in one of the national papers, Yediot Achronot, and found two new words I had learned in one headline, a cause for major celebration.

Remember that Far Side cartoon? What you say to your dog: “Oh Ginger, that was a bad thing. You’re a bad, bad dog, Ginger.” What a dog hears: “Blah Ginger, blah blah blah. Blah blah blah blah, Ginger.” That’s kind of how I experience Hebrew. I was at my friend Rani’s last week while he was deep in a conversation with a friend of his. I completely zoned out, lost in a web of fast-spoken Hebrew words when suddenly, I was awoken from my linguistic slumber by a familiar phrase from Ulpan, m’chaneh m’shutaf. I immediately started screaming “COMMON DENOMINATOR! COMMON DENOMINATOR!“, quite possibly the first time outside of MIT that those words have ever been exclaimed with such glee. To recognize a familiar word…aside from the birth of a newborn, does anything else bring about such a sense of pride? And furthermore, does anything else make you look like such a dork?

In any event, I’ve learned that while the classes are nice, it’s (becoming proficient, that is) all about the practice, specifically doing the homework and speaking outside of class. I need to practice more; it’s hard to dedicate time (l’hakdeesh z’man).

So what have I learned? 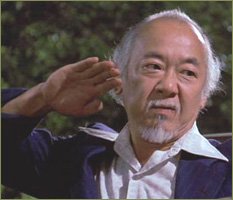 If he taught class, we’d speak Hebrew fluently in a month.
(Plus, we’d know how to paint the fence. “Up…down…breathe in…breathe out.”)

Sticking with the language observations. Israelis are known to be direct (not rude). Did their directness cause the language to develop as it did, with people speaking in a short, direct manner? Or is it simply the absence of words that causes them to get to the point quickly? It’s the old camel and the egg argument. My co-worker Lymore in New York used to get mad at me when I’d say something to her in Hebrew in a single word, like “ZU-zee” (move), accusing me of being rude. That’s how Israelis talk though. They don’t say “excuse me, kind sir, would you be so kind as to move a little bit out the way so I could possibly maneuver my way around you if it’s not inconvenient, please?” They say “move”. It sounds weird for Americans but, hey, when you’re busy fighting wars, who has time for small talk?

Only 7 hours till class begins. Time to go to sleep.