The International Language (No, It’s Not Love)

Posted at 2:51am on Nov 11, 2006 in Culture, Israelis Make Me Laugh, Miscellaneous by Benji Lovitt 0 Comments

Well, my loyal readers, I’m back, spending my Shabbat catching up. Quick: what are the official languages of Israel?

Hebrew and Arabic. So what does it really mean to be an official language? Not that I can speak from experience (as I’ve never been an official language myself), but these and only these languages can be spoken on the floor of the Knesset. So what’s with the English all over the place? Ok, that’s a silly question considering the number of English-speakers in the world and in Israel, but it doesn’t explain the abundance of completely ridiculous English t-shirts I’ve seen during all my visits to Israel. If I had my pictures with me, I’d upload the one of my adopted moshav mother from Year Course. A Moroccan woman…couldn’t link together a subject and verb in English…wearing a Nirvana shirt. (Don’t ask me where she got it but when those music “critics” talk about Kurt Cobain being the spokesman for a generation, I’m quite sure he wasn’t talking about hers. What kind of angst can you really have while harvesting roses?)

The English t-shirts are something that every American laughs about, but let’s face it-a lot of them come straight from the States and the dumb era of “take a sarcastic or biting phrase that shouldn’t be funny to anyone out of high school and put it on a sticker, shirt, or pin”. Like this one… 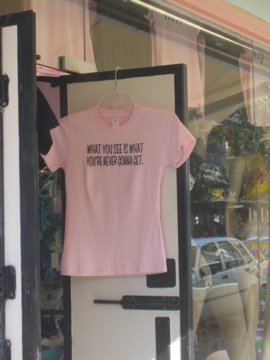 Nice shirt. And by the way, you’re never gonna get this.
But somewhere in transit, some completely non-sensical ones got stuck in the shipment which always makes for a good laugh. Here are just a couple that I captured on film. 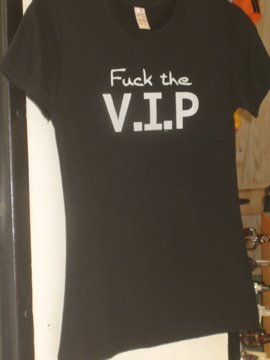 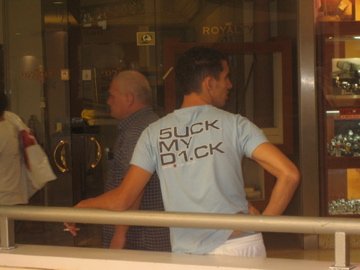 What exactly is a “d1.ck” and how does one “5uck” it?
Oh yes, I forgot this one rule. The shirts may have some sort of inappropriate language, drug reference, or sexual innuendo which may or may not be lost on the wearer of the shirt. As to how this can all be explained…what do Americans expect when we export our pop culture around the world? Also, profane words lose meaning in other countries. Mom, would you have punished me a kid if I walked around screaming the F-word in Mandarin Chinese?

Allright, what else can I tell you? I went to the Dizengoff Center mall yesterday to buy my note cards for Ulpan and walked around with my friend and co-worker Ofra for fun. There’s a food “market” each Friday where you can buy all kinds of prepared foods. We had Indian, bought from an Indian woman (imagine that) who moved here five years ago to open a restaurant. If Israelis are interested to hear my story (and those of other Jewish immigrants), I’d be really interested to hear why a non-Jewish Indian woman would pick up and move here. 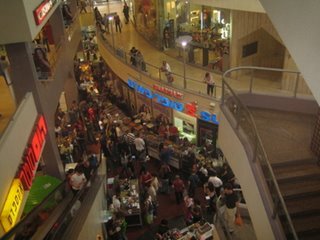 Mmm…lots of food. The red sign on the left, by the way, says “Home Center”, a hardware store.

We stopped in a bookstore. For those of you who read “Freakonomics”, here’s the Hebrew version. Good book. 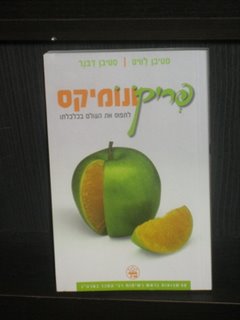 Mom and Dad, don’t buy it. It’s in one of my boxes somewhere.)