Posted at 6:15pm on Nov 11, 2006 in Now I'm Just Being Silly, This Aliyah Moment is Brought to You by the Letter Aleph by Benji Lovitt 0 Comments

If a holiday falls on the calendar in a country that doesn’t celebrate it, does it make a sound?

This past Thursday was Thanksgiving. Especially on the heels of the chagim a few months ago, I have to say that Thanksgiving doesn’t do much for me. Don’t get me wrong, my loyal readers-it’s nice to watch football and put food in your mouth until you’re about to vomit…but that could happen any Sunday afternoon in the US of A. At a belated Thanksgiving dinner tonight, a Brit asked, “So what’s the story behind this holiday?” Ummmm…I think it has something to do with Ben-Gurion and yams. Ok, it’s Pilgrims, but were they before or after the Saducees? The prize for “line of the night” goes to Daniel who answered with “this part of the evening is called the Maggid. (Everyone together now: “You had to be there…”)

Although it shouldn’t surprise, it’s shocking how easy you can forget Thanksgiving when you’re not in a country that celebrates it. And even though we’re spared the pre-Christmas shopping rush, it’s nice to find a group of Americans to have a Thanksgiving dinner with in Israel, if only because hanging out with friends is fun, as is eating good food. But as I said to someone a few days ago, if you want to know why Americans are fat, look no further than Thanksgiving (and the hefty portions at the Cheesecake Factory.)

Thursday night, a friend of a friend had a huge dinner which I kind of invited myself to (in this land of Milk and Hospitality, I wasn’t too worried about offending anyone). There were probably 30 or so people with tons of turkey, stuffing, salads, cranberry sauce, etc. I even watched the first half of the Cowboy game before leaving at halftime.

The highlight of the night…from the mouth of an Israeli watching the game: “Mah zeh ‘first and 10?'” I don’t care where you’re from, that’s funny.

Tonight, it was Part II at Amalia’s house for more of the same foods. One of the topics of conversation was the upcoming release of “Borat” in Israel. Jews must take more pride in our own, kvelling,than any other people on the planet. Take a list like this for example or the ridiculous jewhoo.com Yahoo-themed search engine from a few years back which you may have come across in an email forward. If a celebrity has a Jewish relative within seventeen degrees, someone will try to claim him/her as one of our own (despite the fact that 90-something percent of said celebs couldn’t find Israel on a map and couldn’t spell “Kippur” if you spotted them the kuf, yud, pay, and vav (that is how you spell it, right? (Starting to sweat…)) Example: people love to claim the Beastie Boys as Yeshiva-boy Jews despite the fact that at least one member is a practicing Buddhist. Jewish by blood, fine, but real-life practicing, shul-going Jews? Not even close. Someone actually suggested (wrongly) to me a few years ago that Derek Jeter was a Jew. Gimme a break. Who’s next, Muhammed Ali?

Now, for a good reason to brag: At dinner tables across the world, Jews are kvelling over one of the hottest stars around, Sasha Baron Cohen. Not much to say that hasn’t been said by someone else over the last month. The man is a comedic genius, his movie…while I haven’t yet seen it, I can confidently proclaim from having seen Da Ali G Show…is brilliant, and this reaffirms the idea that while Jews may not control the world (although I’m working on it myself), we do control what is funny. It comes out in Israel on Wednesday…who’s with me? I’m excited to see how much of the Hebrew I can understand.

I sure do have a lot of links in this here post…(did anyone find that amusing besides me? This is how you alienate your fan base…oh well, it was fun while it lasted.) 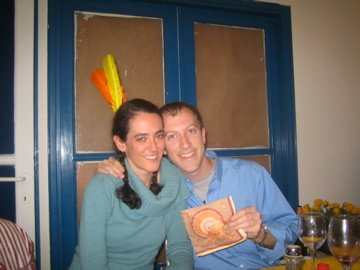 Me and Chief Amalia…hey, does anyone know any Thanksgiving songs?
“I have a little turkey…”

And one final topic which is too important to not address. Amalia and I briefly discussed VJs from MTV, back when it actually played music. Why in the music world are/were there two Dr. Dre’s? Has anyone ever adequately answered this question? Does anyone else find this strange?Comments! Comments! Yaaaaaaaaaaay, comments!