Hey, did you happen to know that I’m a sports fan? No, really! Thank G-d for the internet; I don’t know how I survived for 9 months here after high school without sports. Oh yeah, my mom mailed me the sports page so I could follow the Cowboys’ championship season as I missed every game but the Super Bowl. Thankfully, times have changed, more than anyone could have dreamed back when Troy, Emmitt, and Michael were leading us to the promised land (no, not this promised land). Today, I can listen to ESPN’s “Pardon the Interruption” on my iPod which makes my bus ride to work that much more enjoyable. It’s just unbelievable how accessible information and media are these days. So with NFL games on cable Sunday night and the Sports Guy at my fingertips, living halfway around the world ain’t what it used to be. Who says I can’t still be a sports fan?
  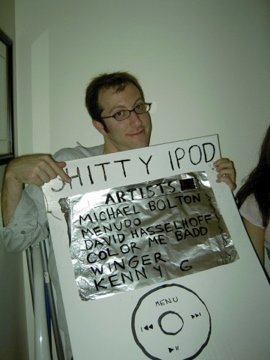 Technology is amazing…unless your iPod looks like this…from Halloween 04 (I think they call this holiday Purim over here. And no, funny friends, this is not the same bad music that I have on my iPod. I have different bad music.)

That all said, my loyal readers, it’s a different world over here. Writing is from right to left, you have to leave your tip in cash at restaurants, and people ride camels all over the main thoroughfares in Tel Aviv (duh, how else would they get around?) Even crazier though, if you turn on a football game, you won’t see 300 pound men in tight pants. You’ll see goals, corner kicks, and crazed fans singing cheers. Last night, I was introduced to the world of “football.”

Since America’s successful display in the 2002 World Cup, I’ve actually spent approximately 1.2 seconds thinking that it might be time to give soccer a chance (roughly 1.2 seconds more than in the first 28 years of my life). After all, the rest of the world loves it. And now that I’m part of the rest of the world, and rubbing shoulders with a bunch of Brits on the Year Course staff, the time seemed to be right to finally take the plunge. Israel-Croatia…IT’S ON, BABY!

Bloomfield Stadium is located in Ramat Gan, a suburb of Tel Aviv. I went by bus, along with a few YC staff members, and arrived about an hour before the game. The moment I walked onto the grounds, I realized the difference between it and an American sporting event. Everything about America is monstrous; you can see it at a stadium, especially in the suburbs when the walk from the parking lot to the stadium is 10-15 minutes. The signs, the ads, the uniformed stadium employees, concessions, souvenirs, stadium music, video highlights, and and so on…it’s quite a sight. There wasn’t nearly as much to this place. In other countries, I guess it’s all about THE GAME, not the experience.

There were some vendors outside the stadium selling simple souvenirs and security checking everyone of course. When I walked in, it was great to be under the big lights and see the green grass. There’s nothing like the energy before a live game. Here is a list of some of my observations and thoughts from the rest of the night: 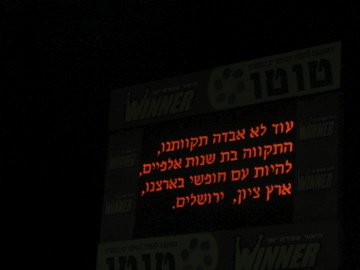 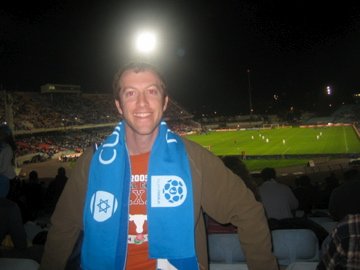 In the end, we lost 4-3. It was a good time and, I guess, my first small step to understanding that other football. I just hope somebody scores a touchdown next time.

Lastly, I did just a little research before the game began. Has anyone in America ever clicked the Soccer link on espn.com? I feel like I just discovered another world, kind of like when Scooby Doo would lift up a candle on a piece of furniture, causing the entire wall to rotate, revealing a secret passageway leading to a giant wing of the house. Who ever knew all this content was there?