Bathroom Adventures (I Have Seen the Face of Evil…) 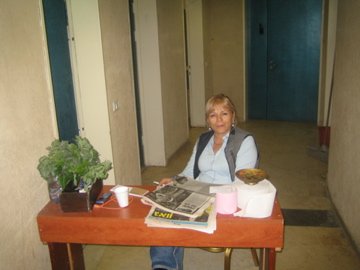 Who is this woman, you might be asking, and why is she the root of all evil? Well, my loyal readers (and let’s welcome Allison, Max, Katherine, Ruthie, Gilly, and Lisa to the party), it’s a sad, sad state of affairs. It’s not so much who this woman is but what she’s chosen to do for money. For this woman, for reasons I can only imagine, charges innocent people to use the public bathroom.

I’m not enough of a world traveler to have enough perspective on this topic so my distaste for this practice is reserved for bathroom goalies in this country. So there I was…taking a 2 hour bus ride from Jerusalem to the Judean Desert to join my program participants on tiyul (hike). By the time I went down from the bus (Jesus, I’m starting to translate directly from Hebrew…WHAT’S HAPPENING TO ME?????????????) at the Ein Bokek Visitor Center, Ema Teva was calling. I ran inside, followed the signs…and then it happened…I saw the sign. 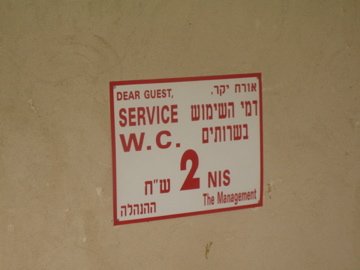 For those who can’t read Hebrew, the text above can be loosely translated to
“We are rat bastards. Management.”

Sorry to go Ace of Base on you there but what’s the deal with THAT?! This seems to be fairly common at bathrooms at bus stations in major cities in this country. Who decided it was ok to charge people to take care of business? That just doesn’t seem right to me. What’s next? A fee to respirate? Sometimes the security system is a revolving door requiring a shekel coin (G-d help you if you don’t have change), and sometimes, it’s a woman like the one shown above. At least she was nice enough to hand me some squares of toilet paper during my grand entrance. I’ll have to remember that when Hanukkah begins next month. 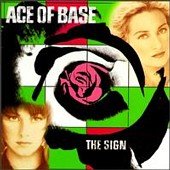 “All that she wants is another bay-bee!” (And the right to urinate for free.)

What kind of benefits could a job like that offer someone? Do you think she gets to use the bathroom for free across the country (ech omrim “professional courtesy”?) That could certainly come in handy when traveling (especially after a few cups of Nescafe). What happens when she calls in sick? Does a temp show up? Management can’t be losing their 2 shekels! I asked Mrs. Dr. Evil why they charge and she explained that management has to raise money for upkeep and whatnot. It’s a BATHROOM! What, are they installing some French windows in there??? This is one of those annoying situations where management passes on their expenses to the customers (like how tenants in New York City have to pay exhorbitant amounts of money to their doormen for Christmas. For Christ’s sakes, that’s what EMPLOYERS are for! I never understood why they relied on our Christmas tips to put food on the table. I hate Christmas tipping in New York-it’s as if certain businesses arbitrarily decided,

“You know what, Bill, I have a crazy idea but it just might work. Let’s pay our employee less than minimum wage, create a culture that says that the CUSTOMERS have to pay for his/her salary, and you and I spend our winters in Bermuda!”

“Jack, you crazy rat bastard! It’s crazy but it just might work!”

In the end, there was a happy ending, I guess. I did get to go to the bathroom and am only two shekels poorer for it. I even got a good laugh as well from a poor speller. 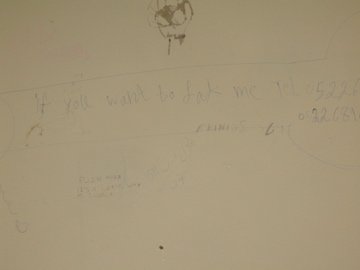 It’s not like I don’t want to fak, bat that’s not really my idea of fan.
Until next time…laila tov (and stay off the Nescafe).